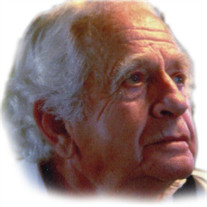 ALMA DARWIN WOLFLEY, born October 2, 1925 passed away February 13, 2016. Darwin was born the first of 6 children to Alma Edward and Ruth Evelyn Whitecar Wolfley in Afton, Wyoming. Their home was in the small farming community of Etna, Star Valley, Wyoming. Darwin is part of that "greatest generation" we've all heard about. That greatness comes from the tremendous sacrifice and hard work from which we have all benefited. Being the first son in his mercantile/farm family put Darwin in position for early responsibility and solid work ethic. Forming the pattern for his life. At the age of 17 and with an early High School graduation he joined the Navy and headed off to help save the world in the Pacific theater of WWII. He served as an aerial gunner on a torpedo bomber, the youngest member of the squadron. Following his honorable discharge in 1946, he married Lola Fluckiger, a beautiful blonde with a smart head on her shoulders also born to responsibility and hard work. The two set out for life and college to USU in Logan, Utah. Three children later (Nancy Kay, Craig Darwin, and Blair), Darwin graduated in 1950 with training in forestry and animal husbandry and a hobby of photography. Years since have been filled with Forest Service, farming, store keeping, cattle ranching, church service and the addition of Carol Ann, Holly, Jeana, and Darla. During the period of 1952-1961, in addition to the operation of our General Mercantile, we built up a ranch of 626 acres, with national forest grazing permit for 300 cows. They operated this ranch as a family unit through 1969. There's not enough room here for details about glorious mornings just before sunup or icy river crossings with a team and sleigh to feed livestock or red eyes rimmed with dirt from plowing and readying soil for planting or bodies so exhausted they literally fell into bed too tired to eat after long days and nights of harvesting, and back breaking work building the Palisades Dam. We can't forget about cattle drives and roundups spring and fall, and fishing and fall hunts for deer, elk, moose, antelope, and even a bear--meat for the family table. There are books that could be written of such details. Then came work for the Farm Bureau in Wyoming, Oregon, and Washington. He was successful with building membership and establishing the SafeMark line farm/ranch supplies. Leaving Farm Bureau, Darwin & Lola returned to ranching for the next fourteen years, later retiring to their beautiful home in Providence, Utah where they have lived out their lives. Darwin served many of his early years in the programs of Boy Scouts of America. Under his guidance the eagerness of youth met the excitement of the outdoors. He also served as a 4-H leader for several years during his early years on the ranch. Life has been very lonely since the passing of his eternally sweetheart nearly two years ago. Darwin's life-long motto was 'leave it better than you found it." Darwin is survived by one brother, one sister, his seven children and their spouses, thirty-two grandchildren, and seventy-six great grandchildren as of the most recent tally. Funeral services will be held on Saturday, February 20, 2016 at 12 Noon in the Providence 4th Ward Chapel, 155 North 100 East, Providence. Friends and family may call at the church prior to services from 10-11:30 a.m. Burial will be in the Providence Cemetery. Condolences and memories may be shared with the family online at www.nelsonfuneralhome.com

The family of A. Darwin Wolfley created this Life Tributes page to make it easy to share your memories.

Send flowers to the Wolfley family.