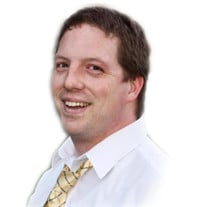 Adam James Rounds suddenly returned home to his Father in Heaven due to injuries sustained in a car accident on Monday, June 14, 2021. He began this life on March 29, 1979, in Sodus, New York, as the oldest child and twin son of Nancy Anne Peck and Ricky Howard Rounds. His early years were spent working hard and playing hard on a small dairy farm in Depeyster, New York, along with his twin, Aaron (Becca) and his sisters, Kendra (Patrick Weller) and Sara (Lucas Manning). When he was 14, his parents divorced and he moved with his mother to Russell, New York, a short distance away. There, he attended public school for the first time, beginning in the eighth grade. He participated in a a wide variety of extracurricular activities and excelled in academics, graduating at the top of his class, second only to his brother. After graduation and a year of college, he served as a missionary in Panama for the Church of Jesus Christ of Latter-day Saints. Upon his returned he obtained a B.A. in psychology (with a minor in Spanish) from SUNY Potsdam in New York. After graduation, he moved to Salt Lake City, Utah where he ended up in the University 41st ward. His future wife moved into that ward a month later. He patiently waited for, then married Jill Grange, daughter of Vance and Tamara Grange of Smithfield on March 16, 2006 in the Logan Utah Temple. They lived for a short time in Bountiful and Woods Cross before moving to Smithfield where they lived while he earned his MBA from Utah State University. He worked in variety of jobs in Logan, Utah, most recently as a business/office manager for Jones Simkins LLC. Adam adored his wife and their three children, Christopher, Carson, and Melody Rose. He loved to tease and be silly with them. He played an active roll in his childrens’ lives, never complaining about changing diapers or getting up in the middle of the night to care for them. He was completely supportive of his wife and willing to do anything for her. If he didn’t understand something in family life and got frustrated, he was willing to apologize and try to do better. Adam enjoyed people and made many friends, maintaining connections without regard to time or distance. He was always willing to serve wherever needed. He willingly served in The Church of Jesus Christ of Latter-day Saints, sometimes in multiple positions at one time if needed. He was a handyman, an inheritance from his father. Going running regularly became an achievement for him. He loved music and his most prized time away from home was singing in the American Festival Chorus. He had an intelligent and active mind and often woke up having discovered solutions to problems or concerns during the night. Our hearts are broken because of lost plans, expectations and hopes. But hope is not gone. We know Adam is not gone forever; he’s just not here right now… and we trust that God’s plans will turn out better for us in the end. Funeral services will be held on Monday, June 21, 2021 at the Smithfield South Stake Center, 451 South 250 East in Smithfield. The viewing will be from 12 to 1 pm with the funeral following at 1:30 pm. Burial will be in the Smithfield Cemetery. Funds have been established in his name at Zion’s Bank locations and at Go Fund Me.

Adam James Rounds suddenly returned home to his Father in Heaven due to injuries sustained in a car accident on Monday, June 14, 2021. He began this life on March 29, 1979, in Sodus, New York, as the oldest child and twin son of Nancy... View Obituary & Service Information

The family of Adam James Rounds created this Life Tributes page to make it easy to share your memories.

Send flowers to the Rounds family.