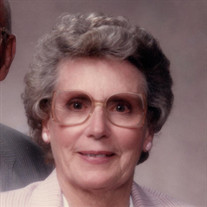 Adele Beutler Schaub passed away February 8, 2017, having reached her 98th year. She was the first of four children of Otto and Zella Beutler, born in Benson on December 30th, 1918. In her childhood she moved three times, all of them inside Benson. As a result, Adele knows the entire town’s connected demographics. Adele was 11 when the stock market crashed in 1929. Her teenage years were spent in the Depression. But all she ever mentioned was all the fun they had growing up on the family farm. Otto, her father would always get a loan to buy seed in the spring and would get enough extra to go to Yellowstone each year. Adele had a happy and fulfilling youth. She attended Utah State University after graduating from North Cache High School . At Utah State she graduated with a Bachelor’s degree in Elementary Education. After college she found a job teaching in Benson and later Millville elementary schools. Adele thought she would never marry and would just be the local school marm. That all changed at the age of 27 when she met Frank Schaub. They were married May 29, 1946. They lived in Logan, Utah, where Nancy was born. Soon thereafter they moved back to Benson where Debora, Jennifer, James and Laurel were born. Adele became a full-time mother. She never lost her love of reading and learning. Adele read incessantly. With her children almost out the house she returned to the classroom again at Benson Elementary school. She taught in the three-room schoolhouse in Benson until the closure of the school and finished her career at North Park Elementary. Her love of learning was infectious. She knew the Latin and Common names of most of the plants and animals around her much-loved Benson home. She was a good friend of the local bird watchers who would stop and ask her what birds she had been seeing. In retirement she and Frank traveled the country with various forms of transportation from motorcycles to camping trailers. They loved to visit national parks, museums and grandchildren. She also was a tutor for many students. Adele had a zest for life. She never said anything downgrading or harsh about anyone. She was always positive and looked at the bright side of life. She was a classic 1st grade teacher, making everyone around her feel like they were her favorite. She was a devoted member of the Church of Jesus Christ of Latter-Day Saints, serving in many positions including Relief Society President, teacher, and Primary President She is survived by her brother Gene Beutler and sister-in-law Koleen Whittington, her children: Nancy (Theon) Merrill, Preston, Idaho; Debora (David) Crockett, Rock Creek, Idaho; Jennifer (Rick) Bell, Glines, Utah; James (Lori) Schaub, Benson, Utah; and Laurel (Douglas) James, Centerville, Utah. She is grandmother to 24 grandchildren, 58 great-grandchildren and 2 great-great-grandchildren. She was preceded in death by her parents, husband Frank, sister Aleda Seamons and brother Calvin Beutler. Funeral services will be held at the Benson 2nd Ward chapel (3432 N 3000 W, Benson) on February 14th at 11:00 AM. Viewings will be held on Monday, February 13th from 6 to 8 PM at the Nelson Funeral Home in Smithfield (85 South Main) and prior to service in Benson from 9:30 to 10:30 AM. She will be laid to rest in Logan City Cemetery. The family would like to thank her daughter Nancy for caring for Mom for many years and the staff of Autumn Care and Access Hospice for her last year. Condolences & memories may be shared online at www.nelsonfuneralhome.com

Adele Beutler Schaub passed away February 8, 2017, having reached her 98th year. She was the first of four children of Otto and Zella Beutler, born in Benson on December 30th, 1918. In her childhood she moved three times, all of them inside... View Obituary & Service Information

The family of Adele Beutler Schaub created this Life Tributes page to make it easy to share your memories.

Send flowers to the Schaub family.