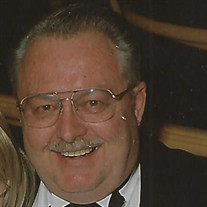 Alan Jay Parker, Age 76, passed away peacefully sometime in the morning of December 2nd, 2020 at the home of his youngest son Russell Jay Parker in Logan Utah Cache Co. Alan was the husband of Kathleen Ann (Thomson) Parker. Alan and Kathleen were married in the Salt Lake City Temple in June 1966. They shared 54 years of marriage together and always made the statement “They are still on their honeymoon”. Alan was born January 21, 1944 in Logan, Cache County, Utah to the Parents of Aubrey Horace and Dorothy Eleanor (Stewart) Parker. Alan had three older brothers. Aubrey Stewart Parker (& Margaret Louise Rose), David James Parker (& Olive Wyoma Heckmann) and Robert Frederick Parker. Alan graduated Logan High School in 1962 where he thoroughly enjoyed being a member of Logan High’s Football team. After Alan and Kathleen's marriage. Alan went on to further his education with great help, support, and sacrifice from his loving wife Kathleen. First to achieve his Bachelor of Science degree from USU as they both worked to raise their first two children along with being management/monitors of an all-girls living arrangement for USU Moen Hall. Alan then went on to gain his Master’s Degree from BYU in Teaching. And then, finally there with the addition of 3 more children and continued support from Kathleen who was his secretary and tutor for Alan as he went on to receive a PHD via online schooling out of California in the field of Safety Management. Alan held many different and diverse jobs throughout his life. Alan's employment brought him, his wife and five children to 20 different homes in 4 different States. But his heart always belonged to Cache Valley. Alan was a member of the Church of Jesus Christ of Latter-day Saints. Alan enjoyed studying the Gospel of Jesus Christ. Alan enjoyed working with his hands and was a tinkerer. Alan loved gardening and would share the bountiful fruits of his labors with friends and loved ones. Alan was proud of his “Master Gardener” certificate from a USU course. Alan loved to fish and loved being around animals and in nature. In Alan's youth he served as a LDS missionary for the New York, New York mission and he took part as a guide in the New York's World's Fair. Alan also served a short three-month tour as a courier for the U.S. Air Force during the Vietnam War. Alan is survived by his wife Kathleen Ann (Thomson) Parker who is living at Sunshine Terrace Assisted Living in Logan Utah, His brother Robert Frederick Parker, four of Alans children Pamela Ann Thompson & ( Dale Leon) of Smithfield Utah, Darrell Jay Parker & (Nancy Ellen) of Smithfield Utah, Ryan Jay Parker & (Kate) of Oregon, Russell Jay Parker & (Michelle) of Logan Utah, his thirteen grandchildren ( Laura, Shannon, Michael, Tristin, Aubrey, Christian, Cassidy, Henry, Anna, Allison, James, Crystal, Elaina) and 6 great grandchildren (Kairi, Emi, Navi, Elliot, Peter & Mary) He was preceded in death by both of his parents, by two of his brothers, Aubrey Stewart Parker and David James Parker, both his Sister-in-Laws. Also, by his daughter Allison Ann Parker who was killed in a car accident in 1997. Due to Covid, following the Governor of Utah’s request, and also Cache Co. requirements there will be a graveside service for immediate family only. Conducted by Nelson Funeral Home 162 E 400 N, Logan, UT, 84321 (435) 752-3261. Condolences & memories may be expressed at www.nelsonfuneralhome.com

The family of Alan Jay Parker created this Life Tributes page to make it easy to share your memories.

Alan Jay Parker, Age 76, passed away peacefully sometime in the...

Send flowers to the Parker family.