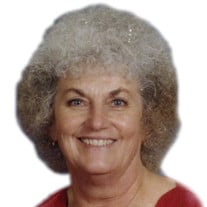 Alberta Heaps Mather passed away peacefully in her sleep February 3, 2016. She was born February 23, 1941. She is the daughter of Donna Gittins Teany and Albert and Donna Heaps. At age eleven she went to live with her aunt and uncle, Marlow and Vella Woodward. They became like parents to her. She attended Summit Elementary and graduated from Preston High School. Alberta met her sweetheart, Maurice Mather, at a MIA activity. It was love at first sight! They were married on April 8, 1960 in the Logan LDS Temple. They were the parents of seven children who loved them dearly. Alberta was no stranger to hard work. In her youth, she worked on the family egg farm. Later, when she was married, she worked side-by-side with her husband on the farm. She worked many years for Cache County School District and made the best “lunch lady peanut butter bars” around. She was a member of the Church of Jesus Christ of Latter Day Saints and served in many callings; her favorite being the compassionate service leader. She has always given her all to serving in the Church. Alberta was such a loving and humble person. She always put everyone’s needs ahead of her own. She was a silent server to her family and to all those around her. She is preceded in death by her husband, Maurice Mather, her parents: Donna Gittins Teany, Albert and Donna Heaps, and Marlow and Vella Woodward, and by her sisters, Shirley (Steve) Gracek, and Fae Skabelund. She is survived by her children Brian (Stephanie) Mather, Brad (Jean) Mather, David (Laura) Mather, Sheri Black, Kurt Mather, Gary Mather, Amy (Mark) Davis, 17 grandchildren, 4 great grandchildren, and her siblings: Vella (Blaine) Durrant, Mary (Sam- deceased) Ritter, Maureen (Carlos) Elwood, Nancy (Don) Hobbs, Carol (Ken) Smith, Kent ( Mary Lou) Heaps, and Kevin (Chris) Heaps. Funeral services will be held at 12:00 p.m. on Tuesday, February 9, 2016, at the Smithfield 16th Ward Chapel, 6575 North 2400 West, in Amalga Utah. A viewing will be held on Monday evening from 6:00 to 8:00 p.m. at the Nelson Funeral Home, 85 South Main Street, in Smithfield and prior to services on Tuesday from 10:30 to 11:30 a.m. at the church. Interment will be in the Smithfield Cemetery. We love and miss you Mom. Condolences and memories may be shared with the family online at www.nelsonfuneralhome.com

Alberta Heaps Mather passed away peacefully in her sleep February 3, 2016. She was born February 23, 1941. She is the daughter of Donna Gittins Teany and Albert and Donna Heaps. At age eleven she went to live with her aunt and uncle, Marlow... View Obituary & Service Information

The family of Alberta Heaps Mather created this Life Tributes page to make it easy to share your memories.

Alberta Heaps Mather passed away peacefully in her sleep February...