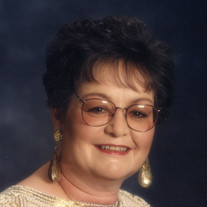 Alice Lucille Nate Layland, age 73, passed away on Saturday, April 9, 2016 at the Sunshine Terrace following a long illness. She was born September 22, 1942, in Montpelier, Idaho, to Stanley and Margaret Fern Langford Nate. Lucille was named after both of her grandmothers. She was the first of six children. She went thru grades kindergarten thru part of 12th grade in Cokeville Wyoming. Lucille married Marquis Layland on August 7, 1959, just prior to beginning her Senior Year at Cokeville High School. Mark accepted a job in Three Forks, Montana, so Lucille finished high school in Three Forks but returned to Cokeville to graduate with her class. They moved back to Cokeville from Three Forks where they worked on various ranches. Lucille was terrified of mice so it was just her luck to live in several houses where mice were residents also. When her health permitted she attended the Church of Jesus Christ of Latter-day Saints and held such positions as Primary Counselor, Cub Scout Leader and taught a Gospel Doctrine class. Their son, Nathan Mark Layland. was born on July 8, 1961, in Montpelier, Idaho. Mark and Lucille moved to Ely, Nevada, where Mark went to work for Kennecott. Lucille got involved in becoming a CNA and worked at the Ely Hospital. They adopted their daughter, Leslie Annette Layland, from Reno, Nevada, in July of 1967. Nathan and Leslie share the same birthday only 6 years apart. Lucille and Mark were divorced in May of 1974. She then moved to Logan where she went to work for the House of Sound followed by working for Dr. Merrill Daines for several years. During this time she met and married Roland (Jim) Carter of Preston, Idaho. Although Jim and Lucille were later divorced, Jim's children, grandchildren and great-grandchildren were always very dear to her and have always remained close to her. After her divorce from Jim, Lucille moved to Salt Lake City where she went to work for Western Neurological Associates. After having to have open heart surgery she moved to Hyrum to be near more of her family and at that time took a medical disability. In about 2000 Lucille moved in with her sister, Colleen, and lived with her until the time of her death. Lucille is survived by her children Nathan Mark Layland of Laramie, Wyoming and Leslie Annette (Gene) Hayes of Salt Lake, as well as five grandchildren and 6 great-grandchildren. She is also survived by her mother, Margaret Fern Nate of Logan; sister. Colleen Nate of Logan; brothers Cornell (Susan) Nate of Stansbury Park; Keith Leon (Lynette) Nate of Cokeville, Wyoming; Kent O. (Jane) Nate of Salt Lake City and brother-in-law Alan (Bonnie) James of Hyrum, as well as numerous step-children. step-grandchildren and step-great-grandchildren from the Carter family. She was preceded in death by her father, a sister, Garnett. and one great niece. She was known to her many nieces and nephews as Aunt Lucy and they loved calling her "Alice", a name that was definitely not her favorite. Per her request, there will be a graveside service at 12 noon on Wednesday, April 13, 2016 in the Hyrum City Cemetery. Arrangements are under the direction of Nelson Funeral Home. Condolences may be sent to the family at www.nelsonfuneralhome.com

The family of Alice Lucille Layland created this Life Tributes page to make it easy to share your memories.

Send flowers to the Layland family.