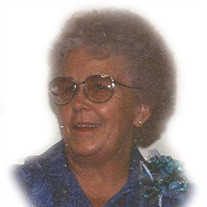 Alieen Christiansen Bird, 89, of Logan, Utah, passed away on September 4, 2015, at Legacy House of Logan of causes incident to age. Alieen was born in Logan, Utah, to Niels Wilford Christiansen and Erma Mary Hill Christiansen on June 19, 1926. Her Mother passed away when Alieen was five days old, and she was raised in Newton, Utah, by her father and grandparents. She graduated from North Cache High School. Alieen and her Dad moved to Logan, Utah, when she was 18 years old where she attended Utah State University. Alieen met her future husband, Rolen Lloyd Bird at the Logan Roller Rink, and were married in the Salt Lake LDS Temple on November 22, 1946. They made their home in Logan where they raised four children. They were married 59 years. Alieen was an active member of the LDS Church. She served in many callings including Primary, Cub Scouts, and the Library, but she especially enjoyed the Name Extraction Program where she served for many years. Her hobbies included Genealogy, crocheting, cross-stitching and embroidery. Alieen is survived by one son, Alan (Ileen) Bird of Smithfield, Utah, two daughters, Dee Ann (Gerald) Smith of Syracuse, Utah, and Janis (Scott) Borchert of Orem, Utah; a son-in-law, Randall Saxton of Millville, Utah; 20 grandchildren; 52 great-grandchildren (with one on the way); and six great-great-grandchildren. She was preceded in death by her husband; her parents; one daughter, Jeanine Bird Saxton; two sisters, LaNore Cheney and Eva Smith; a grandson, Terry Jon Smith; and a great-grandson, Tanner Bird. A viewing will be held from 6 to 8 p.m., Thursday, September 10, at the Nelson Funeral Home, 162 E. 400 N. Funeral Services will be held at 11 a.m. on Friday, September 11, at the Willow Valley Ward LDS Chapel, 825 N. 200 W. with a viewing from 9:30 to 10:30 a.m. Interment will be in the Logan City Cemetery. Condolences may be extended to the family online at www.nelsonfuneralhome.com. Special thanks to the Access Hospice and Legacy House of Logan for their loving care of Alieen.

The family of Alieen Christiansen Bird created this Life Tributes page to make it easy to share your memories.

Alieen Christiansen Bird, 89, of Logan, Utah, passed away on...