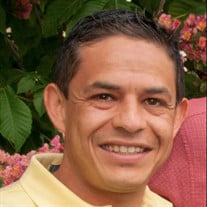 Alvaro Luis Calvimonte, beloved son, brother, tío, and friend, died unexpectedly on February 21, 2022 in Logan, Utah at age 48. Alvaro was the eldest child of four born to his parents Maria Teresa Mauri and Luis Francisco Calvimonte in La Paz, Bolivia on December 8, 1973. As a boy, Alvaro was sweet and caring and was very close with his family in Bolivia. He was loved by his many aunts, uncles, and cousins who thought of him as a son and a sibling. Growing up, on the weekends Alvaro and his family would stay at their cabin in Mallasilla, La Paz where he would golf with his father and brother Jorge. He would carry a love of golf throughout his life. Alvaro moved to the United States with his family when he was 11 years old. Although he experienced culture shock at first, he was able to succeed in all areas of life. He graduated from Logan High School in 1992, where he played soccer and was on the wrestling team–he won 2nd place in State his senior year. He went on to graduate from Utah State University with a degree in Finance. Despite the degree in finance, his personality and interests geared him towards customer service where he had a successful career, most recently at Miele. He took a lot of pride in his work and the relationships he built with coworkers and clients alike. Alvaro was a dedicated son, brother, and uncle and told anyone within earshot about his loving family. He was devoted to his mother Teresa and was always concerned for her welfare, never letting his brothers forget that they needed to “protect our Mama Bear”. His number one priority was taking care of his mother. He lived with her for the past twelve years, and always tried his best to make sure she had everything she could want or need. His affection for her was matched by no other. Each night, he would even tuck her into bed with a stuffed bear he gave her, saying “duérmete con tu osito” (“go to sleep with your little bear”), and kiss her goodnight. He was a good example to his brothers of how to unconditionally love and care for their mother. Alvaro would tell you that besides his mom, his “babies” (his nieces and nephews) were the loves of his life. Tío Al was the favorite uncle and it was easy to see why. Every time one of his “babies” would visit him, he had a new toy to show them, treats and candy to give them when parents weren’t looking, or his latest Halloween costume to show off. He loved to have fun with them and tried to instill in them his love for soccer, golf, and Latin music. He was generous and kind to all. When anyone came to visit, he was instantly offering a beverage, chocolate, ice cream, nachos, anything to make sure his visitor was happy and comfortable. Throughout his life, Alvaro loved without reserve and gave of himself without hesitation. We will miss him dearly and honor his memory by following his generous, loving example. Alvaro was preceded in death by his father, Luis Calvimonte, who died a year prior on March 1, 2021. He is survived by his mother, Maria Teresa Mauri, his 3 younger brothers, Jorge (Peggy), Carlos (Carolina), and James (Brittany), and his nieces and nephews, Brianna, Mila, Desmond, Quinn, and Simon. Funeral services for Alvaro will be held on Friday, March 4, 2022 at the Nelson Funeral Home, 162 E 400 N, Logan, UT 84321. A viewing will be held between 5-6 pm, followed by the funeral service at 6 pm.

Send flowers to the Calvimonte family.