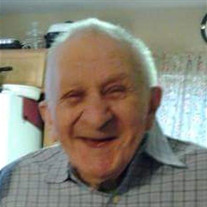 Amador Armando “Skip” Mares, 85, passed away peacefully in Chandler, AZ on Saturday November 5, 2016. He was born April 30, 1931 in Arroyo Seco, New Mexico to Emilio and Juanita Mares. He lived and was educated in New Mexico. He then moved to Center, Colorado where he met his wife of Thirty Five years, Helen. The family moved to Salt Lake City, eventually making his way to Hyrum. Armando loved the spring and summer in Hyrum and would spend his fall and winter in Maricopa Az. He enjoyed traveling, cooking and spending time with his grandchildren. His Family would like to express their deepest gratitude and appreciation to Hospice of the Valley-Dobson House, the staff and volunteers, Dr. Myers, Father Fernando Velasco, Sister Marilyn Mark at St. Thomas Aquinas Church. Special Thanks to all family and friends who have extended their help and care. Armando is survived by his two daughters, Juanita (James) Ilk of Hyrum; Christina (Martin) Morales of Maricopa, AZ and four grandchildren: Esperanza, Vivianna, Avery and Mathew. He is also survived by several nieces and nephews. He was preceded in death by his wife, Helen, parents, Emilio and Juanita Mares, brother, Jose Mares and Sister, Florinda Mares. A rosary with be held at 9:30 a.m., Friday November 18, 2016 followed by a funeral mass at St. Thomas Aquinas Church 725 South 250 East , Hyde Park, UT 84318. No viewing will be held. Services are under the direction of Nelson Funeral Home. Condolences may be extended to the family online at www.nelsonfunerahome.com

The family of Amador Armando Mares created this Life Tributes page to make it easy to share your memories.

Send flowers to the Mares family.