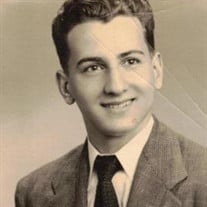 Anthony John Sara 85 of Paradise, passed away Wednesday, October 21, after a long and valiant battle with cancer. He was born June 24, 1935 in Astoria, Queens, New York to Salvatore and Concetta Presti Sara, who both immigrated as children, from Sicily. He was educated in New York, and graduated from The College of the City of New York on February 1, 1957. He was the first in his family to graduate from college. His father was very proud of his scholastic accomplishments and nicknamed him “professore”. He served in the US Army as a Military Intelligence Specialist. He graduated top in his military training courses and was given the opportunity to select his assignment. He chose to serve in Italy and was stationed in Vicenza Italy. It was there that he met his future bride, Antonia. They met in a restaurant where she was making pizzas and worked as a waitress. At first she wasn’t impressed with this American GI that told her, after she served him the pizza she had made; “You call this pizza, you have to come to New York to taste good pizza.” Then didn’t even leave her a tip. However, over time, her opinion of him soften and they dated and fell in love. He married Antonia (Anna) Intrano Sara on November 5, 1960 in Santa Rita church in New York and made their home in Millville, New York. He worked for Metropolitan Life for 37 years. He became an Assistant Regional Vice President in the Government Relations Division where he served on several State Insurance Association Boards including the New England States, Pennsylvania, California and Colorado. After retiring In 1993 Anthony and Anna moved to Paradise, Utah. Anthony is survived by his wife, Anna, of 60 years (Nov. 5th), his sister Anne Fischetto of Franklin Square NY and nieces and nephews: Tom (Kathie) Palazzolo of Clarkston UT, Richard Palazzolo of Cache Junction UT, Steven Palazzolo of West Hempstead NY, Priscilla Palazzolo of Morrisville NC, Roy Fischetto Garden City South NY, Linda and Jose Alvear Franklin Square NY, Kathy (Jessie) Gifford of Brigham City UT, Steve (Jan) Sara of South Jordan UT, Debbie (Wallace) Bowen of North Logan UT, Sherrie (Tom) Davis of Inkom ID and Maryanne (Curtis) Butterfield of Riverton UT. Anthony was preceded in death by his parents, his Sister Mary Palazzolo, brothers Angelo Sara and Steve Sara and one niece Carol Austin. There will be a viewing prior to the funeral at 11:00 at St Thomas Aquinas Catholic Church at 725 S 250 E Hyde Park, Utah. The funeral will begin at 12:00 noon. The link to the funeral service on ZOOM https://us02web.zoom.us/j/87106421341

Anthony John Sara 85 of Paradise, passed away Wednesday, October 21, after a long and valiant battle with cancer. He was born June 24, 1935 in Astoria, Queens, New York to Salvatore and Concetta Presti Sara, who both immigrated as children,... View Obituary & Service Information

The family of Anthony John Sara created this Life Tributes page to make it easy to share your memories.

Send flowers to the Sara family.