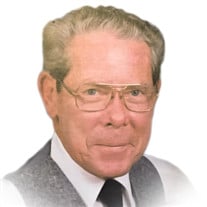 Arlen Morris Buttars. 88, passed away Sunday September 4 in Logan, UT. He was born August 24, 1928 in Logan, UT to Orson Morris and Elva Layne Buttars, the fourth of six boys. Arlen grew up on a farm in Lewiston. At a young age he learned to work hard. He married Dolores Glover November 20, 1949. Their marriage was later solemnized in the Logan temple. Together they had six children. He worked many different jobs through the years, the ones he enjoyed the most were the ones that were working outdoors. Together he and mom always kept a nice yard. One of the hardest things he had to do was give up mowing the lawn. He was a member of The Church of Jesus Christ of Latter-Day Saints, where he served in different callings, he enjoyed home teaching with Lloyd Elwood, served as an activity director for mutual, and was the ward custodian for 10 years. He and mom served a working mission in Salt Lake City at the Church History Library. He is survived by his wife; sons DeVon (Sheila) of Clarkston, UT; Darrel of Roseburg, OR; Dennis (Nancy) of South Jordan, UT; daughters Darlene (David) Andrew of Lewiston, UT; Darla Barrera of Lewiston, UT; DiLynn (Steve) Christensen of Richmond, UT; 23 grandchildren, 43 great-grandchildren, 11 great-great-grandchildren and one brother Gail Buttars of Logan. He was preceded in death by his parents and brothers, Maurice, Vurel, Guy and Val Buttars. The family would like to thank PrimRose Homecare (Monty, Joel, Sandy, and Tara) for their great care and the great people at Pioneer Valley Lodge. Funeral services will be held Thursday, September 8, 2016 at 1:00 p.m. at the Lewiston 2nd ward chapel 10 S 1600 W Lewiston, UT. A viewing will be held Wednesday September 7 from 6:00 to 8:00 pm at the church and Thursday from 11:00 am to 12:30 pm prior to the funeral. Interment will be in the Lewiston City Cemetery. Condolences and thoughts may be expressed to the family online at www.nelsonfuneralhome.com

Arlen Morris Buttars. 88, passed away Sunday September 4 in Logan, UT. He was born August 24, 1928 in Logan, UT to Orson Morris and Elva Layne Buttars, the fourth of six boys. Arlen grew up on a farm in Lewiston. At a young age he learned to... View Obituary & Service Information

The family of Arlen M. Buttars created this Life Tributes page to make it easy to share your memories.

Send flowers to the Buttars family.