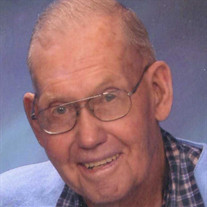 Arthur Bryan Marshall, Jr., 92, a longtime resident of Logan, passed away peacefully on Tuesday, January 6, 2015 at Terrace Grove Assisted Living in Logan, Utah. He was born October 12, 1922 in Logan, Utah to Delila Lehmberg and Arthur Bryan Marshall. He was raised and educated in Logan, graduating from Logan High in 1940. He joined the National Guard in 1936 and was inducted in the U.S. Army on March 3, 1941. After his return from World War II in 1945, he married Mae Andrew on July 3, 1946 in the Logan LDS Temple. He worked at Utah Power and Light, Steed’s Dairy, Cache Valley Dairy and retired from Cream O’ Weber Dairy in 1985. An active member of the LDS Church, he has served in many positions including Stake High Councilor, Bishoprics, Sunday School, Young Men’s and as a Scoutmaster. His hobbies over the years have included softball, where he pitched for many years for Grant’s Bike, Al’s Bike and the LDS Church, traveling throughout Idaho, Utah and Wyoming. He bowled with his wife, Mae, on a league for over 20 years. He has enjoyed boating, camping and golfing with the achievement of two holes in one. He also fulfilled a lifetime dream of learning to fly and obtained his pilot’s license in 1947. He was a great husband, father, grandfather, and great-grandfather who cherished his family. He is survived by his eight children; Pat (Keith) Dagley of North Ogden, Utah, Kim (Karen) Marshall of Hyde Park, Utah, Scott (Pat) Marshall of Hyde Park, Utah, Kaylene (Joe) Yonk of Mendon, Utah, Bette (Kim) Liechty of Mt. Juliet, Tennessee, Sue (Dave) Draut of Dewitt, Michigan, Paul (Kelly) Marshall of Hyde Park, Utah, and Janet Deters (Scott Hofer) of Green River, Wyoming, 39 grandchildren, and 50 great-grandchildren. Also surviving are sister-in-laws, Wanda Andrew, Ruby Andrew and Ann Andrew and brother-in-law, Leland A. Cottle. He was preceded in death by his parents, his brother Boyd Clem Marshall, and his wife, Mae Andrew Marshall. Funeral services will be held Saturday, January 10, 2015 at 12 noon in the Crocket Ward Chapel, 325 Lauralin Dr., Logan, Utah. Friends may call Friday evening from 6 to 8 p.m. at Nelson Funeral Home, 162 East 400 North, Logan and at the church on Saturday from 10:30 to 11:30 a.m. Interment will be in the Logan City Cemetery. The family wishes to express their appreciation to the staff at Terrace Grove Assisted Living Center, Access Hospice, and Dr. Robert Nash for their loving care of our father. In lieu of flowers, donations may be made to the LDS Perpetual Education Fund.

The family of Arthur Bryan Marshall Jr. created this Life Tributes page to make it easy to share your memories.

Send flowers to the Marshall family.