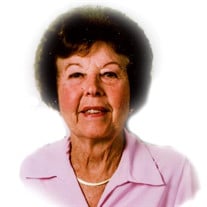 Barbara Rigby Bird October 18, 1929 – February 12, 2017 Barbara Rigby Bird passed away peacefully Sunday, February 12, 2017 in Providence, Utah. She was born October 18, 1929 in Newton but she will be 29 forever. She is the fourth of seven children born to Golden and LaVerne Barker Rigby. She graduated from North Cache High School. She married Seth John Bird on April 8, 1948 in the Logan Temple They are the parents of four children: Doug (MaRee) Bird, Newton, Diane (Paul) Mower, Salt Lake City, Christine (Kent) Oviatt, Vernal, and Patricia (Bruce) Lyman, Blanding. Barbara was an active member of the Church of Jesus Christ of Latter-day Saints and served in numerous capacities. She gladly provided service wherever there was a need. Barbara was active in the Daughter of Utah Pioneers, River Heights Literary League and Club, Lambda Delta Sigma, served many years as Secretary of the Logan Temple and served a mission at the Family History Center in Logan with her husband. She worked as a secretary for Olsen and Davis construction and Thorne and Wilson. She loved to travel with Seth while he worked as the County Road Superintendent. Barbara is survived by her children, 14 grandchildren, and 23 great grandchildren, 6 siblings: Flora Bird, Margene Bradshaw, Joan Nissen, Jay (Helen) Rigby, Frances (Norman) Ravsten, and Mary (Gordon) Jenkins. She is preceded in death by her husband and her parents. She has been living at Cache Valley Assisted Living Center in Providence for the past six months. While there she made many friends. The family would like to thank the staff that helped care for her and Access Hospice along with the many friends and neighbors. The family invites loved ones and friends to celebrate Barbara’s life with them at a service held at the River Heights First Ward, Providence Utah Stake Center, 800 South 600 East, River Heights, on Saturday, February 18, 2017 at 11:00 a.m. There will be a viewing on Friday evening from 6-8 p.m. at the Nelson Funeral Home, 162 East 400 North, Logan and at the Church on Saturday prior to services from 9:30-10:30 a.m. Interment will be in the Mendon Cemetery. In lieu of flowers the family invites you to donate to the General Mission Fund of the Church of Jesus Christ of Latter-day Saints. Condolences and memories may be shared with the family online at www.nelsonfuneralhome.com

The family of Barbara Rigby Bird created this Life Tributes page to make it easy to share your memories.