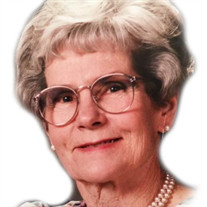 Camille Beth Neuffer Carter (94) passed away on March 31, 2019. She was born March 13, 1925 to Myron and Camille Cole Neuffer in Preston, Idaho. As a child Beth loved to walk in the hills behind the farm; especially in the springtime as she searched for bird nests and the first Bluebells and Buttercups which grew in abundance on the dry farms. She graduated from Preston High School. Beth loved music; playing the piano was a favorite pastime all her life. Beth married Mark J. Carter on September 1, 1943 in the Salt Lake City Temple. They were married 63 years. They lived in Preston, ID for the first 3 years of their married life then purchased a ranch in Bridger Canyon near Bozeman, Montana where they lived for 17 years. In 1963 she and Mark moved their family to their beautiful cattle ranch near Ten Sleep, WY in the Big Horn Mountains. There they raised their family, working together, and entertaining family and friends. In later years they spent their summers at their Black Foot River Ranch near Soda Springs, ID. There they enjoyed visits from children, grandchildren, and friends as they all worked, hiked, rode horses, 4-wheelers, snow machines, and skied. The winter months were spent at their home in Smithfield, UT. Beth served in the Church of Jesus Christ of Latter Day Saints throughout her life. She and Mark filled a mission to the New York North Mission from 1993-1995 and served as officiators in the Logan Temple. A trip to South Korea as a member of The Friendship Force was a highlight of her travels. She also enjoyed membership and associations in the Smithfield Summit Camp Daughters of The Utah Pioneers. Her lifetime work and joy was in supporting her husband and in raising and teaching her children. She was an example of strength, faith, and perseverance her whole life. She is survived by her children who will always remember her with great love and respect: Camille Butler (David) of West Jordan, UT; Susan Tomblinson (Joe) of Post Falls, ID; Jim Carter (Carol) of Spanish Fork, UT; Tom Carter (Cindy) of Lake Winnebago, MO; Richard Carter (Susie) of Ten Sleep, WY; Bruce Carter (Marsha) of Parker, CO; Pamela Reutzel (Ray) of Laramie, WY; Karen Carter of Coeur D’Alene, ID; Elizabeth Smith (Shane)of Honeyville, UT; Laurel Wilde (Ross) of Preston, ID; Holly Compton (Greg) of Cove, UT and 53 grandchildren. She was preceded in death by her husband Mark J. Carter and grandson Mark T. Carter. Funeral services will be held Friday April 5th at 11am at the 1850 N 400 E Ward Building in North Logan with a viewing prior to the service from 9:30 to 10:30 am. Interment will be at the Logan City Cemetery. A special thanks to all the staff at Maple Springs and Hospice nurses Kelly and Anna for caring for our dear mother.

Camille Beth Neuffer Carter (94) passed away on March 31, 2019. She was born March 13, 1925 to Myron and Camille Cole Neuffer in Preston, Idaho. As a child Beth loved to walk in the hills behind the farm; especially in the springtime as she... View Obituary & Service Information

The family of Beth N Carter created this Life Tributes page to make it easy to share your memories.

Send flowers to the Carter family.