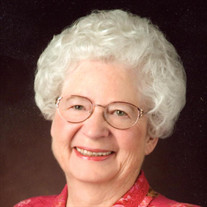 Beth Johnson Somers, 94, finished her journey on earth with a smile on her face, surrounded by her family, on August 8, 2020. She died of natural causes at her home in Logan, Utah. Beth was born in Logan on May 6, 1926, to Oliver and Vilate Nyman Johnson. She grew up in Logan with four brothers (Nyman, Jim, Reed, and Carl), one sister (Ollie Jean) and lots of cousins. She attended the Benson School, Ellis School, Logan Junior High School, and graduated from Logan High School. She attended Utah Agricultural College for a time and then worked in Ogden at the 2nd Street Army Depot. When the war ended, she met the charming W. Karl Somers who had recently returned from the war in the Pacific. They were married in 1947 in the Logan Utah Temple and started life together in Logan and River Heights. In 1953, they moved to southern California, where they made their home until 1958 when they returned to Logan. They built their home on what had been her father’s farm and raised their family there. Together Beth and Karl enjoyed camping and fishing, spending many nights in a tent and later in a camper, and many days in their boat on a lake fishing. Together they attended Aggie basketball and football games. They always grew a large, beautiful garden and Beth made sure that every raspberry, tomato, bean, pea, or ear of corn was preserved and used wisely. They built a dream cabin in Cub River Canyon, where they enjoyed many summer days. In between times she enjoyed reading, knitting, and crocheting. For many years she made tins full of a variety of Christmas candies. She lovingly cared for her grandchildren whenever the need arose. The children and grandchildren will remember Christmas Eve parties at her home and Easter egg hunts in the backyard. Beth was a faithful member of the Church of Jesus Christ of Latter-day Saints and especially enjoyed her callings in the Relief Society and Primary. She and Karl did name extraction for many years. As she spent many hours doing her genealogy, she longed to know more about her ancestors and their struggles. When she had the opportunity to visit the land of her Johnson ancestors in Denmark, she was thrilled and often revisited her memories of that time. Beth was quiet, kind, humble and loving, never raising her voice in anger. She was frugal and lived by the motto “waste not want not.” She loved her family and was thrilled to learn of their achievements and accomplishments. Beth is survived by her five children: Brent (Kathy) Somers, Linda (Steven) Downs, Michael (Joyce) Somers, Patty (Eric) Loosle, and Jerry (Marie) Somers; fourteen grandchildren; twenty-eight great-grandchildren; a sister, Ollie Jean Sorensen; and a sister-in-law, Roberta Logue. She was preceded in death by her husband, W. Karl Somers; parents, Oliver and Vilate Nyman Johnson; Nyman Johnson, James and Jessie Lue Johnson, Reed and Gloria Johnson, and Carl Johnson; grandsons, Andrew Somers, Benjamin Loosle and Landen Loosle; and great-granddaughter, Nellie Somers. The family would like to thank CNS Hospice for their loving care the past several months, especially Julie, Lindsey, Amanda, and Jewelysa. And a heartfelt thank you to loving neighbors and friends. Private graveside services will be held at the Logan Cemetery. Arrangements are under the direction of Nelson Funeral Home. In lieu of flowers, consider donating to Share Parents of Cache Valley in support of parents who have suffered a loss. Share Parents, 705 West Haven Drive, Logan, Utah 84321, or paypal.me/cvshareparents

Beth Johnson Somers, 94, finished her journey on earth with a smile on her face, surrounded by her family, on August 8, 2020. She died of natural causes at her home in Logan, Utah. Beth was born in Logan on May 6, 1926, to Oliver and Vilate... View Obituary & Service Information

The family of Beth Johnson Somers created this Life Tributes page to make it easy to share your memories.

Beth Johnson Somers, 94, finished her journey on earth with a...

Send flowers to the Somers family.