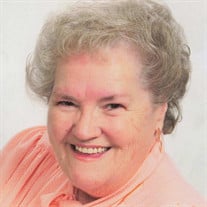 Betty Jean Luna Henderson graduated this life on March 29, 2022. Betty was born July 29, 1931, in Fayetteville, Tennessee to J.B. Luna and Mary Himebaugh. Betty attended school in Tennessee until 11th grade when her family moved to Winter Haven, Florida where she graduated from Winter Haven High School. Although she was awarded a fine scholarship for French Horn performance, she was unable and not allowed to attend college. Betty began working at age 8 in her family's cafe to pay for her own corrective shoes, some of life's necessities and her beloved musical instrument. During this time, she developed an incredible work ethic, which she relied on throughout her life. Betty married Lorenzo F. Henderson in Miami, Florida and had two children, Renee Frances and Richard Wade. She loved Lonnie and he loved her, but his additions forced her to bravely divorce after nine years of marriage. She took on the task of raising two children alone in the 1960's, with very little support of any kind. After the children were raised, she moved to Utah in 1978 to be near her grandchildren. She was the administrative assistant and best professional secretary to the director of the Utah County Health Department for 20 years. When she retired in 1996, which she never dreamed she would be able to do, she moved to Logan to be near her grandchildren. There she was able to buy a small home, and for the first time feel safe and secure. For the many of us that knew Betty as the happy, loving, outgoing, caring individual in her later years, know that those traits were developed in the face of very difficult challenges that spanned her first 65 years here on earth! Mom, you did great! We will always remember the love you so freely gave us. We will remember your smile and sweet southern accent. We will also remember the great sacrifices you made on our behalf. A part of you lives on in each of us! Betty is survived by her two children, Richard Henderson and Renee (Patrick) Nolan both of Logan, Utah. Five grandchildren: Rachael (Seuao) Niusulu, Rebecca Sortor, Mary (Allen) Cox, David (Alexis) Nolan, and Sarah (Chad) Romney. She is also survived by 13 grandchildren: Lily, Tessa, Ryan, Amelia, Sabrina, Benji, Noah, Phoebe, Zeke, Ezra, Asher, Eve, and Leo. She was greeted on the other side by her mother, the love of her life Lonnie, grandson John Nolan, and great grandson Miles Romney. A viewing will be held Thursday, March 31, 2022 from 6:30 – 8:30 p.m. at Nelson Funeral Home,162 East 400 North, Logan, Utah and Friday from 9:30 – 10:30 a.m. at the Bridgerland Park First Ward 825 North 200 West, Logan, Utah. The funeral will follow at 11:00 a.m. Interment, Logan City Cemetery. Services will be available via zoom. Password: Betty https://us02web.zoom.us/j/85622117748?pwd=SFErQUhxN09qcytDTCtMZmZBQURhQT09

Send flowers to the Henderson family.