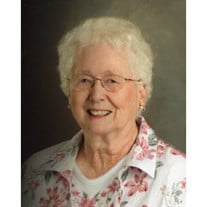 Betty Jane Daines Phillips, 82, passed away at the Logan Regional Hospital on July 14, 2009 due to complications from non-Hodgkin's Lymphoma. She was born September 23, 1926, in Whitney, Idaho to Rudgar Hatch and Rebecca Woodward Rallison Daines, the oldest of three children. She grew up in Whitney and later moved to Logan, Utah where she was educated in the Logan school system. Betty graduated from Utah State University with a degree in elementary education. She taught third grade at the Wilson Elementary for four years. While she was attending school at USU, she went on a blind date with another couple, and from that date Betty met David Levi Phillips from Smithfield. They fell in love and were married on February 7, 1947 in the Logan LDS temple. In 1954, she became a full-time mother to four children, three sons and one daughter. Betty was an excellent neighbor and genuine friend. For many years, Mother was a care giver to parents, friends and family. She worked side by side with her husband David as his secretary of Phillips Construction. All who visited her beautiful home have memories of wonderful meals and love for her flower and vegetable gardens. An integral part of Betty's life was her religion. She held several callings as a member of The Church of Jesus Christ of Latter-day Saints. Through her musical talent Betty served as a ward organist and chorister for over 60 years. She also served a mission as an extraction specialist for the Smithfield, Utah stake for 5 years. Betty and Dave have always enjoyed traveling throughout the United States with their children. In their retirement years, they drove to Alaska where they had a memorable adventure. Her children and grandchildren have been the beneficiaries of Betty's handiwork which included quilts, counted cross stitched items, crocheted hot pads, and afghans. She is survived by her husband, David Levi Phillips; their four children: Joseph Karen, Smithfield; Jane Martin Dennis, Payson; Reed Lisa, Ogden; and Todd Connie, Benton City, Washington; 16 grandchildren and 15.8 great grandchildren; and the following siblings: Dawna Thayne Lloyd; Nancy Ruth Daines; sister-in-law, Miriam Cooper, Centerville; and many nieces and nephews and their families. She was preceded in death by her parents and a great grandson, Jackson Bishop. Funeral services will be held at 11:00 a.m. Monday, July 20, 2009 at the Smithfield 14th Ward chapel, 451 South 250 East, Smithfield. Friends may call Sunday evening, July 19, 2009 from 6 to 8 p.m. at Nelson Funeral Home, 85 South Main, Smithfield and Monday morning from 9:30 to 10:30 a.m. at the church prior to services. Interment will be in the Smithfield City Cemetery. Condolences may be extended to the family online at www.nelsonfuneralhome.com.

Betty Jane Daines Phillips, 82, passed away at the Logan Regional Hospital on July 14, 2009 due to complications from non-Hodgkin's Lymphoma. She was born September 23, 1926, in Whitney, Idaho to Rudgar Hatch and Rebecca Woodward Rallison Daines,... View Obituary & Service Information

The family of Betty Jane Daines Phillips created this Life Tributes page to make it easy to share your memories.

Betty Jane Daines Phillips, 82, passed away at the Logan Regional...

Send flowers to the Phillips family.