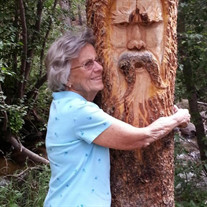 Betty Lou Beutler Peterson, 96 peacefully passed away Monday, August 16th at Birch Creek Assisted Living in Smithfield. Surrounded by her family. Betty Lou was born January 30, 1925 in Logan the second of four children born to William (Bill) and Mary Meikle Beutler. Betty Lou was raised in Logan and attended Logan City Schools graduating from Logan High School in 1943 She attended Utah Agriculture College She married Miles Adams Peterson June 7 1946 in the Logan LDS Temple, they made their home in Logan where they raised 4 children, Conley (Renae) Peterson, Gary (Debbie) Peterson, Luann (Glen) Baker, Carol Jensen . Betty Lou worked at several local businesses and retired from Schreibers Foods. She was an active member of the Church Of Jesus Christ of Latter Day Saints and held many callings in the church. Betty and Miles served an LDS Service Mission in 1997-1998 at LDS Employment Services. Betty Lou volunteered as an usher for the Ellen Ecchles Theater for over 20 years. In addition she was a Cache Valley Visitor Bureau host, and a host at the Logan LDS Tabernacle serving there for 10 years. Betty and Miles loved camping and traveling; they attended the annual All 4 Fun Jeep event for many years in Colorado. Early in theirs travel to Colorado they became fascinated with a Forest Service PIT Project (Passport in Time) working on restoration and preservation of the Alpine Tunnel near Pitkin Colorado for over 20 years they would travel to Colorado and work with a group of fellow volunteers from across the United States They were both original members of the Alpine Tunnel Historical Association. She was preceded in death by her husband of 63 years Miles, son Conley, Son in Law Stuart Wasson and a great grandchild Jack, She is survived by her three children and their spouses 13 grandchildren, 18 great grandchildren. Viewing will be at the Nelson Funeral Home in Logan 162 East 400 North. Friday August 20th at 10:00 AM to 11:30 AM. Following the viewing Graveside service will be the Logan City Cemetery. Condolences may be extended to family online www.nelsonfuneralhome.com The family would like to thank Chris Sorensen, and his staff at Birch Creek Assisted Living, for their compassion and caring for Mom. They would also like to thank hospice for their help.

The family of Betty Lou Beutler Peterson created this Life Tributes page to make it easy to share your memories.