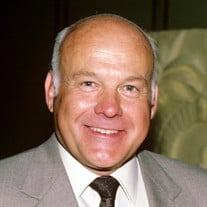 Boyd Thorpe Jones Feb. 24,1932 – June 25,2016 Our loving father, grandfather and great grandfather, Boyd Thorpe Jones, passed away, June 25, 2016, at home surrounded by his family. He was born in Newton, Utah to Ralph Carr and Eunice Thorpe Jones -the second of four sons. He was raised on the farm where he learned the value of hard work. He was called to serve an LDS mission in Holland, but due to the Korean War, the Church cancelled all missions. He married his high school sweetheart, Jean Allsop, Sept 19, 1952 in the Logan Temple. He graduated from Utah State University with a BS degree in Mathematics. Upon graduation he received his commission as an officer, 2nd Lt., in the US Air Force. They traveled to Tuscon, AZ where he took his pilot training. He later served as a Flight Instructor teaching new recruits to fly the T-33. During their time in the Air Force, Boyd and Jean gave birth to three sons, Gary, Mark and Steven. They were stationed in Big Spring, TX, Selma, AL, Palo Alto, CA, and Colorado Springs, CO. The Air Force sent Boyd to Stanford University where he received his Master's Degree in Mathematics with a focus on something relatively new at the time - Computer Science. He was promoted to Captain and sent to Ent AFB in Colorado Springs, CO, to head up the Base’s Computer Dept. Boyd loved flying and maintained his flying status for the entire nine years he served in the Air Force. He left the Air Force in July of 1963 and joined Control Data Corporation (CDC). He opened the CDC office in Salt Lake City and sold the LDS Hospital its first computer. Starting in sales, he worked his way up to a senior executive position where he served as President of Government Systems. He worked tirelessly with CDC for 27 years. He maintained his pathway of innovation and leadership when he left CDC to run Dayna Communications, Salt Lake City, Utah, as their CEO before retiring from his esteemed career. Boyd was no less than an industry Titan - a key player in building the computer industry. Boyd was always a great father and family man. He coached his sons in Little League Baseball, taught them all to ski, golf, and most importantly, to be good, honest, hard working men, and to always put family first. He was an active member of the LDS Church, serving as Elders Quorum President and Stake High Councilor as well as many other Church positions. He was a devoted husband, father, grandfather and great-grandfather. Boyd was preceded in death by his parents and brother, Trevor W. Jones. He is survived by his loving wife of almost 64 years, Jean Allsop Jones, his three sons, Gary B. Jones (Susan), Mark R. Jones, and Steven C. Jones (Kimberley); six grandchildren and six great grandchildren. He is also survived by his brothers Norval R Jones (Dody) and George L Jones (Evelyn), Sisters-in-law, Lois Allsop Peterson, and Ruth Griffin Jones. Funeral service will be held at 11:00 AM on Thursday June 30th at the North Canyon Stake Center, located at 965 East Oakwood Dr, Bountiful UT. Visitation will be held on Wednesday June 29th from 6:30 to 8:30 PM at the same location and prior to the funeral at 9:30 to 10:30 AM. Burial will be at the Smithfield Cemetery in Smithfield Utah with a brief graveside service starting 3:30 PM In lieu of flowers please consider sending donations to the Huntsman Cancer Institute. https://donate.huntsmancancer.org/give Condolences and memories may be shared with the family online at www.nelsonfuneralhome.com

The family of Boyd Thorpe Jones created this Life Tributes page to make it easy to share your memories.