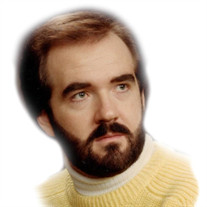 Bradford Keith Whitaker died on January 9,2017 in his home in Logan, Utah. Brad was born April 29, 1958 in Montpelier, Idaho. He was the oldest son to Earl Keith Whitaker and Joyce Ludene Hooker. Brad spent his childhood in Nampa, ID moving to Cache Valley during his junior high years. The Brad we'll remember was the dashing, jumping, sword fighting Pirate King in the Pirates of Penzance. When Brad performed, he bewitched and entertained with his rich voice and physical presence, playing hit roles like Pharoah in Joseph and the Amazing Technicolor Dreamcoat and Captain Von Trapp in The Sound of Music. Brad performed with the USU Theater and Music Departments, Utah Musical Theater, and Sun Valley Carolers during his college years. After his senior year in college, Brad moved to Manhattan to pursue his passion for theatre, where he remained with the love of his life, Fernando Moreno, for 30 years. While in New York, he performed and directed Off-Broadway cabarets, and taught in a performing arts school. Brad's love for the arts extended beyond theater. He was an avid collector of art, art-deco and art- nouveau. He loved plants and landscape architecture, and had a distinctive eye for design and beauty. Brad's 6'6" stature could not contain his larger than life personality. Family and friends will remember Brad for his robust laughter and tender heart. He will be missed by his siblings Ann (Rick) Langenheim, Craig (Annette) Whitaker, and Cherie (Jeff) Hansen and their children. A gathering to celebrate his life and enjoy some favorite Broadway tunes will be held on Saturday, February 4, 2017 at 12-2 p.m. in the Caine Room, 2nd Flor of the Family Life Building, Utah State University. Parking available at the south west corner of the quad. Our sincerest gratitude to the medical and emergency personnel who assisted Brad. Brad often commented on the continued kindness extended to him throughout the Cache Valley community. In lieu of flowers, bring pie. Condolences and memories can be shared with the family at www.nelsonfuneralhome.com

The family of Bradford Keith Whitaker created this Life Tributes page to make it easy to share your memories.

Bradford Keith Whitaker died on January 9,2017 in his home in...

Send flowers to the Whitaker family.