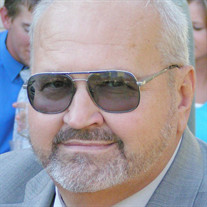 After a fourteen year battle with ill health, Bruce Earl Bair, 64, of Richmond, Utah, passed away on October 31st, 2015 at the IMC hospital in Murray, Utah. Bruce was born October 5, 1951 in Logan, Utah and grew up in Smithfield, Utah. He was the first son of Lowell Erickson and Margene Thomas Bair formerly of Smithfield, Utah and the brother of Brent Thomas Bair (Carolyn Flygare) of Richmond and Robert Lowell Bair (Julie Higbee) of Smithfield. He married Linda Stocks (Kennan) March 15, 1974 and was blessed with two surviving sons, Brandon Bruce Bair of Richmond, Utah and Bartley Lynn (Dana Petersen) Bair of Hyde Park, Utah. After 23 years of marriage, Bruce and Linda divorced but he never remarried due to the onset of ill health a couple of years later. Bruce was known for his ‘bear-like’ size and his love of the outdoors. He enjoyed playing basketball, camping, riding horses, and hunting and fishing with his boys and his dad. After graduating from Sky View High in 1969, he joined the Smithfield Unit of the National Guard. He provided for his family through work at Del Monte in Franklin, Idaho; Thiokol, Presto Products; and Deals on Wheels. He was a member of the Richmond LDS 2nd ward where he taught Sunday School, served in the Stake Athletic program, played on and coached the ward basketball and softball teams, and served in the scouting program among other callings. Bruce will be greatly missed by his family including his sons Brandon and Bartley; daughter-in-law Dana; his beloved grandchildren: Ashton, Tristan, Sydnee, Londyn, Austin and Brooks; his brothers Brent and Bob; sisters-in-law Carolyn and Julie; nieces, nephews, cousins, and his many friends including Roger and Linda Kennan. He is preceded in death by his parents and grandparents, two aunts and an uncle—LaVonne (Thomas) Elliot and Harry & Ruth (Bair) Fern. Thanks to members of Richmond 2nd Ward for their care and for providing a luncheon after the services. A special thanks to his transplant doctors, his respiratory physician Dr. Lyn Brown, and all of the nurses and others who have attended to his health needs over the years. According to his wishes, there will be a viewing at Nelson Funeral Home, 85 South Main, Smithfield on ­­­November 4th from 6 to 8 p.m. and November 5th from 11:30 to 12:30 prior to graveside services at 1:00 p.m. at the Smithfield City Cemetery, 300 E Center St. Condolences may be expressed to the family online at www.nelsonfuneralhome.com

After a fourteen year battle with ill health, Bruce Earl Bair, 64, of Richmond, Utah, passed away on October 31st, 2015 at the IMC hospital in Murray, Utah. Bruce was born October 5, 1951 in Logan, Utah and grew up in Smithfield, Utah. He was... View Obituary & Service Information

The family of Bruce Earl Bair created this Life Tributes page to make it easy to share your memories.