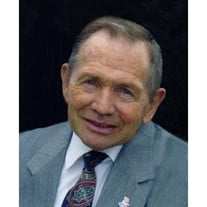 BRUCE EARL DARLEY Bruce Darley, 72, of Logan, UT, formerly of Hyrum, UT passed away at home, with his wife and family at his side, on September 6th, 2009, after a 35 year struggle with Parkinson's disease. Bruce was born on October 24th, 1936, in Brigham City, Utah to J. Earl and Berenece Brunker Darley. He spent his first 12 years growing up at the family home in Portage, Utah. His family then moved to Hyrum, Utah. Bruce enjoyed his time there helping with the family farm. He graduated from South Cache High where he was active in many clubs and excelled in several different sports. After serving two years in the Northern States Mission, he attended Utah State University and graduated with a degree in Psychology and minor Animal Husbandry. Bruce enrolled in the ROTC program while at USU and began a life long dream of learning to fly. After graduation, Bruce entered active military duty and attended flight school at Camp Wolters, Texas, and Fort Rucker, Alabama. He served in Viet Nam and was decorated with the Bronze Star and an Air Medal for valor. Bruce was honorably discharged in 1968. Bruce married Nina Lee Cooper and to that union was born five children: Lisa, Layne, Lance, Landon, and Ladd. They were later divorced. He taught Seminary at Sky View High School for two years then began a 22 year career with Utah State University until Parkinson's disease forced his retirement in 1991. As part of his work at USU, he participated in the creation of the Summer Citizen Program and was a director of that program. Many Summer Citizens remember him and speak highly of him. Bruce served six years on the Hyrum City Council and eight years as the Mayor of Hyrum. Bruce spent most of his life in community service and serving others. It was his special gift to make others feel good about themselves. In February of 2000 Bruce married Ayako Maeda Pease, and they moved to Mountain Home, ID. Bruce's health continued to deteriorate and Ayako eventually resigned her position to spend full time caring for Bruce. They then moved back to Cache Valley to be closer to family and friends, settling in Logan, Utah. Throughout his life church was very important to him. He served in many church positions as a member of the Church of Jesus Christ of Latter Day Saints, including bishop and as a counselor in a stake presidency. He loved golf, hunting, camping, and fishing with his sons. He enjoyed working and playing on the family farm. Bruce enjoyed life and greeted everyone with his characteristic twinkle in the eye. He loved everyone he met. Never did he complain about his Parkinson's disease; he just took it in stride as part of his life. Bruce was preceded in death by his father and mother. He is survived by his companion Ayako, his children: Lisa, Layne Annette, Lance Josi, Landon Teri, Ladd Erica; his stepchildren: Heidi, Christopher, and Chanel Pease Mark Hellner; two brothers: Ralph Sherien and Dennis Barbara. He has nine grandchildren. Bruce will be missed by his family and many friends. Bruce and Ako belonged to the Cache Valley Parkinson's Support Group and were grateful for the support and camaraderie they had with the other members of that group. The family wishes to thank those who helped in Bruce's care during the final year of his life: Doctors Lars Bergeson, Hal Astle, Ryan Larsen, Integrity Home Health and Hospice, BRAG Aging Program, Options for Independence, friends, and neighbors. Funeral services will be held at 11:00 a.m. Friday, September 11, 2009, at the Hyrum North Stake Center, 245 Apple Drive, Hyrum, UT. Friends and family may call Thursday evening from 6 to 8 p.m. at Nelson Funeral Home, 162 East 400 North in Logan and Friday morning at the church from 9:30 to 10:30 a.m. prior to services. Interment will be in the Hyrum City Cemetery. Condolences may be extended to the family online at www.nelsonfuneralhome.com.

BRUCE EARL DARLEY Bruce Darley, 72, of Logan, UT, formerly of Hyrum, UT passed away at home, with his wife and family at his side, on September 6th, 2009, after a 35 year struggle with Parkinson's disease. Bruce was born on October 24th, 1936,... View Obituary & Service Information

The family of Bruce Earl Darley created this Life Tributes page to make it easy to share your memories.

Send flowers to the Darley family.