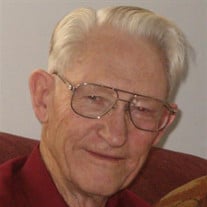 Bryan Garnell Sorenson, 93, passed away Tuesday, Oct. 22, 2019 of causes incident to age. He was born Sep. 15, 1926 to Chesney Bryan Sorenson and Jessie Alithe Beal in Ephraim, Utah. His mother passed away when he was 6 months old, after which his father moved the young family to Cub River, Idaho. He grew up there and with his grandmother in Manti, Utah. He graduated from Preston high school, then served in the Navy at the end of WW2. He received a degree in manufacturing engineering and tool design from USU. He married LuGene Cole on Nov. 21, 1947 in the Logan Temple. She passed away in Feb. 2015. He worked at Geneva Steel, Eimco, Pack Manufacturing, and at Thiokol in Brigham City where he helped develop the solid fuel booster rockets for the Minuteman missiles. He helped start Thiokol in Logan, designing and manufacturing the first Trackmaster snowmobiles. He then started his own tool and prototype design and fabrication company, Sorenson Design & Development Co. in 1967, where he served many loyal customers around the area. He worked every day until he was 85, and then part time for several more years. He influenced many employees, not only with his help in mechanical engineering, but also with life skills and integrity in business. He was a faithful member of the Church of Jesus Christ of Latter Day Saints and held many positions in the Logan Ninth ward. He also served in branch presidencies at Legacy House and Williamsburg Assisted Living centers. He is survived by his daughter, Linda Gillespie, grandson Matthew, granddaughter Teresa Hansen (James), 5 great grandkids, Joey, Daria, Lillian, Sophie and Evelyn, and 5 step great grandkids, Tyler, Kylee, Baily, Malia, and Dalin Hansen. Also by sisters Carol Andrews (Lawrence, deceased), Betty Wilkinson (Fred, deceased), and Reva Boyack (Wayne, deceased), and many nieces and nephews. He was preceded in death by his wife LuGene, a step-grandson John Gillespie, and a sister Alithe Ross. Funeral services will be Saturday, November 2, 2019 at 12:00 p.m. at Nelson Funeral Home, 162 East 400 North, Logan, with a viewing that morning from 10:00 to 11:30 a.m. Interment will follow the service at the Logan City Cemetery. The family would like to thank Dr. Jeffery Huffman and the staff at Terrace Grove Assisted Living Center for their care and kindness. Condolences may be sent to the family online at www.nelsonfuneralhome.com.

Bryan Garnell Sorenson, 93, passed away Tuesday, Oct. 22, 2019 of causes incident to age. He was born Sep. 15, 1926 to Chesney Bryan Sorenson and Jessie Alithe Beal in Ephraim, Utah. His mother passed away when he was 6 months old, after which... View Obituary & Service Information

The family of Bryan Garnell Sorenson created this Life Tributes page to make it easy to share your memories.

Send flowers to the Sorenson family.