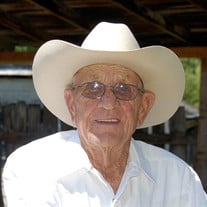 Buford Swanson Jr. June 27, 1928 – September 19, 2015 Junior was born June 27, 1928 in Hyrum, Utah to Buford Lionel and Martha Elizabeth (Bessie) Cook Swanson joining two older sisters; Chloe and Lois, later getting a younger sister, Rella Mae. He lived his entire life in Hyrum. As a young boy he developed his love of horses and the meaning of hard work. His father Buford set a good example and always had work for Junior to do. He received his schooling in Hyrum. Life was hard but they found ways to have fun. When they could get enough money the whole family could go to a movie at the Sparta Theater on Main Street, 10 cents was enough for a ticket and candy. In the winter they would play Monopoly or “Shaker Basket.” One of his first jobs was mowing the town square with a mower pulled by their horse Shakes, taking 6 days to do the whole thing. About age 10, he had saved enough money to buy his first horse, Nellie for $20. His love for horses was a full-time hobby. He loved to train Quarter Horses and enter competitions. In addition to Cutter Racing and Western Pleasure his real passion was Cow-Cutting. He won several competitions in the 60’s. He also engineered and built an “Electro/Mechanical Cow System” installed in his arena for training. He married Renee Plowman in 1948. They had four children: Rhonda, Scott, Gary and Susan. They divorced in 1971. He then married Sonja Pace and they had a daughter, Robyn. They also divorced. A few years later, Renee and Junior became close friends again till the end. He worked at both Tri Miller and EA Millers Meat packing plants, then in building construction and later driving heavy equipment for road construction before becoming a full time horse trainer. It was a sad time when Junior could no longer ride his horses. He enjoyed being part of the Hyrum Saddle Club, on the JC’s and as a Volunteer Fireman. He was a life long member of the American Quarter Horse Association. He is survived by Renee of Hyrum, daughter Rhonda (Brian) Anderson of Nibley, son Scott (Karen) Swanson of Orting Washington, son Gary (Janiel) Swanson of North Logan, daughter Susan (Dave) Corless of Logan, daughter Robyn Swanson of St. George, his younger sister Rella Sherrill of West Valley City, 17 Grandchildren, 40 Great Grandchildren and numerous generations of nieces and nephews. The family would like to thank the Health Care Team at Logan Regional Hospital, especially those at the ICU and Hospice for their efforts. A family viewing will be held Friday, September 25th 11:30 to 12:30 at the Nelson Funeral Home with Graveside Services at 1 pm at the Hyrum Cemetery. Condolences may be sent to the family online at www.nelsonfuneralhome.com.

The family of Buford Swanson Jr created this Life Tributes page to make it easy to share your memories.

Send flowers to the Swanson family.