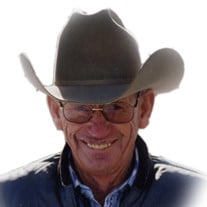 The end of the trail for one of the last real cowboys. Calvin Tarbet Beutler 87, passed away on January 10, 2015 at his home in Smithfield. He was born September 21, 1927 in Benson, Utah to Otto and Zella Tarbet Beutler. The youngest of four children. His brother and sister were Adele, Eleda , and Gene. He always claimed he was “born on the oven door.” He married Marilyn Pickett on November 19, 1949. They were later sealed in the Logan Temple. They were blessed with two sons, Michael and Mark. Marilyn passed away on January 2, 1992. He married Mary Ann Barkdull on September 3, 1993, and gained a daughter, Barbara. Cal had two great loves in his life. He started riding horses at 4 years old and never quit. He also had a great passion for flying and received his pilots license at a very early age. As a young man in the early 1940’s, every time he would earn a little money he would ride his horse from Benson to the Logan Airport and be off in a plane, for however long he could afford. Then ride his horse home. The best of both worlds he always said. He was drafted into the U.S. Army in 1946. After basic training he was stationed in Tokoyo and Hiroshima right after the “A” bomb. He witnessed so much devastation, he could hardly stand it. He was so proud to have served his country and loved the American Flag. He was honorably discharged in 1948. H was a boy scout leader for many years, a home teacher for most of his adult life. He spent many years with the Cutter Association in Smithfield and was a talented wild life photographer. He was raised as a farmer so he knew the value of hard work. He was part owner of the Trout-Mink Farm west of Smithfield. He spent many years as a Range Rider for the Cattle Association in Logan Canyon. Cal worked for Smithfield City for 20 years as Parks/Cemetery supervisor. He was also a volunteer fireman and was instrumental in saving a small boys life. He took great pride in knowing he helped to make the Cemetery and Mack Park what they are today. He was preceded in death by his wife, Marilyn, his mother & father, sister Eleda and many, many friends and relatives. He is survived by his wife, Mary Ann, brothers Gene, (California); sister Adele (Preston); sons Mike (Mary), Brigham City, Mark (Penny), Providence; stepdaughter Barbara (Brad) Johnson, Montana. Many grandchildren, great grandchildren and great great grandchildren. He loved little children, riding his horse in the mountains, and aviation. His leather braiding is known everywhere, but mostly was given away. At his request, no public viewing will be held. A graveside service will be held at 1:00 p.m. on Thursday, Jan. 15, 2015 in the Smithfield City Cemetery. In lieu of flowers the family request donations be made to the Smithfield City Library. Condolences and memories may be shared with the family online at www.nelsonfuneralhome.com

The end of the trail for one of the last real cowboys. Calvin Tarbet Beutler 87, passed away on January 10, 2015 at his home in Smithfield. He was born September 21, 1927 in Benson, Utah to Otto and Zella Tarbet Beutler. The youngest of four... View Obituary & Service Information

The family of Calvin Tarbet Beutler created this Life Tributes page to make it easy to share your memories.

The end of the trail for one of the last real cowboys.
Calvin...

Send flowers to the Beutler family.