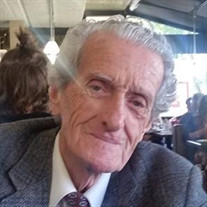 Calvin Carlos Cornia, a most beloved helper, partaker of the Divine Nature, passed away from complications following an illness on Sunday, January 8, 2017. He lived humbly but in constant service, much like our Savior. Calvin was born July 21, 1925, to Virgil Enoch Cornia and Edna Jane Welch Cornia. Calvin talked of his youth in the Salt Lake Valley before his father took a job in Cache Valley. He was preceded into the eternities by 3 brothers: Donald, David, and Max. All 3 older brothers served in the military, but Calvin was unable due to a childhood illness. Calvin spent his life in service to others. He was a gardener, a photographer, a painter, a craftsman, and an artist in every way. He lived in beautiful surroundings of his own decorator’s touch. He built, he painted, he restored, he developed, and he entertained. He loved electronics and spent hours entertaining family and friends throughout the 80’s and 90’s with his unique collection of laser disc movies, a rare medium. Calvin was unable to read, but it was often said that his mother read instructional manuals to him. His special brand of intelligence led him to become an expert in many hobbies including craftsmanship, photography, horticulture, and oil painting. He sold several paintings in his day, and even had his own dark room for years. His photography was published in catalogues and books. Although Calvin did not escape female attention, he did not marry in this life, to the frustration of a few single ladies in the valley, as recalled by family members who knew the young, strong, capable, and gentle man. He was at his mother’s side until she passed away in 1992. He spent many months volunteering and entertaining residents of the Sunshine Terrace rest home while she convalesced there until her death in 1992. He was consistent protector and caretaker to his sister in law Bessie Cornia, wife of brother Max, who was a Korean War widow, until her death in 2012. Calvin’s 43-year career caring for the grounds of the Logan Temple culminated in his work as Head Grounds Engineer. His service at the Logan Temple is historically noteworthy, and documented by many photographs of his that were published in the Book, “The Logan Temple, the first 100 years.” By Nolan Olsen. In an article published in the Logan Herald Journal May 11, 1984, which marked his 41st year of service, Calvin speaks of the day that an eagle flew down the chimney of the smokestack (now gone) of the temple annex. He and his crew freed the anxious but compliant eagle. The eagle allowed a quick cleaning on the temple lawn, then flew away. The eagle is a fine symbol of the peaceable, persevering, patient and emotionally intelligent free spirit that Calvin is. All who know Calvin, know that he is, as that eagle, free now in his mind to explore the heights of his spirit for all eternity, and is with his beloved parents and family. He often spoke of an awareness of their presence in his last years. We say to our loved one: Until we meet again, dear uncle, brother, son, cousin, brother-in-law and friend, we will remember you through your art and your free spirit. You lived a life free of offense in service to your family, fellow man, and your Father in Heaven. You have overcome the world. Calvin got himself to church weekly in the historic 4th Ward building, the same chapel he helped restore after the 1962 earthquake, until very recently. Like that building, Calvin is a local treasure. A service is being planned there for 1:00 p.m. Saturday, January 14th at the Logan 4th Ward Chapel for all in the community who would like to honor him. There will be no viewing. Interment will be in the Logan City Cemetery. Condolences may be sent to the family at www.nelsonfuneralhome.com. In lieu of flowers the family suggests donations to the American Cancer Society. The family would like to extend heartfelt gratitude for the service of a dear neighbor, friend and voluntary angel, Seluvia, through the last years of his life. You kept him free until it was his time to fly up.

Calvin Carlos Cornia, a most beloved helper, partaker of the Divine Nature, passed away from complications following an illness on Sunday, January 8, 2017. He lived humbly but in constant service, much like our Savior. Calvin was born July 21,... View Obituary & Service Information

The family of Calvin Carloss Cornia created this Life Tributes page to make it easy to share your memories.

Calvin Carlos Cornia, a most beloved helper, partaker of the...

Send flowers to the Cornia family.