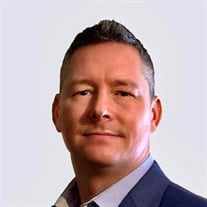 Carey Michael Day passed away on Friday, June 4th in Pleasant View, Utah. He was born on January 1st, 1975 to Harvey and Cheryl Day in Bountiful, Utah. He spent his early childhood in Virginia Beach, VA. At fourteen, he moved with his family to Tacoma, Washington, where he graduated from Curtis High School. After high school, he served a mission for the Church of Jesus Christ of Latter Day Saints in Rio de Janeiro, Brazil. He developed a great love for the people of Brazil and described the city of Rio as his “heaven on earth” and “the most beautiful place” he ever lived. He went on to serve in many church callings. After serving his mission, Mike survived a buot with Hodgkin's lymphoma. He graduated with an M.B.A. from Utah State University and worked in the healthcare field in pharmaceutical and medical device sales and was most recently employed by Precision Diagnostics. Mike had many talents and interests. He was an avid reader, skier, golfer, duck hunter and enjoyed sports of all kinds. He loved long conversations with friends and family about numerous subjects. He loved food and cooking and experimenting with gluten free recipes and making Brazilian cuisine for his children. He had a deep love for his country and appreciation for those who served it. He developed many treasured relationships with family and friends through the years and was an easy person to love. His fun personality and big heart left a legacy of countless friends who truly love him. His most important legacy and love of his life are his four beautiful children, McKenly, Tylee, Talon, and Bracken. He spent countless hours supporting them, spending time with them and loving them. They were truly the focus of his life and as he recorded were his “end all and be all”. Mike’s smile, laugh, and sparkle in his eye from happier times will never be forgotten. He was a wonderful, intelligent, caring person. At his best, he was nothing short of amazing. We love you Mike! Mike was preceded in death by his mother Cheryl, and older brother Joseph who died in infancy. He is survived by his children, father Harvey, sister Brandy Millward (John) and numerous nieces and nephews. A viewing will be held on Monday, June 14th in Logan, Utah at Nelson Funeral Home (162 E 400 N) from 10 am to 11:30 am and a graveside service will follow in Arimo, Idaho at 1:30pm.

Carey Michael Day passed away on Friday, June 4th in Pleasant View, Utah. He was born on January 1st, 1975 to Harvey and Cheryl Day in Bountiful, Utah. He spent his early childhood in Virginia Beach, VA. At fourteen, he moved with his family... View Obituary & Service Information

The family of Carey Michael Day created this Life Tributes page to make it easy to share your memories.

Send flowers to the Day family.