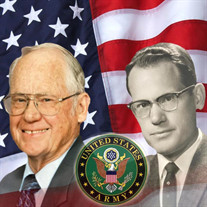 Carl Floyd Veibell was born to the late Sorine Christine Hansen and Peter Martin, the eighth of ten children, in Cornish, Utah on April 11, 1932. Carl, or Floyd as he was best known, was the last surviving member of his immediate family and died peacefully in his sleep on February 25, 2022. Floyd was hard working and valued education. He worked his way through school receiving a Masters degree in Mechanical Engineering from Utah State University in 1962. He married Anita Jeanene Whitehead on June 9, 1961. Floyd was an attentive and invested father to their five children. In June of 1969 they were sealed together in the Logan Temple. Floyd believed in and lived the motto, “use it up, wear it out, make it do, or do without”. A jack of all trades he could turn his hand to anything and enjoyed the challenge. Floyd had a “can do” attitude. He instilled that work ethic and frugality in all his children in one way or another. Floyd was not afraid to stand up for what he believed to be right in work and community efforts. In sharp contrast those closest to him knew of his gentleness, generosity and patience with those who appeared to be alone, vulnerable or without support. Floyd is remembered by many who, during challenging times, were welcomed - without judgment - into his own heart and home and treated as family. Floyd had a soft spot for children and would listen to, go anywhere, and do anything for a grand or great grandchild. He was dependable and honest and believed deeply in family and in taking care of his own. Floyd was a positive and steadying influence to his children, nieces and nephews, grandchildren, and great-grandchildren. Beloved Husband and father, grandfather, and great-grandfather, and Uncle, he leaves a legacy of hard work, dependability, sacrifice, and devotion that is an inspiration to all who mattered most to him. His gentle peaceful parting was an unexpected loss felt by all those who knew and loved him best. But, because we love him, we rejoice that he will be reunited with a large and loving family, a father he hasn’t seen since 8 years old, and many lifelong friends who have gone before. Funeral services will be held on Friday March 4th, 2022 at 11 am in the Trenton/Cornish ward chapel 1200 N 400 W Trenton, UT. A viewing will take place before the services from 9:30 am-10:30 am. Interment will take place in the Cornish City Cemetery. Funeral Services under the direction of Nelson Funeral Home.

Carl Floyd Veibell was born to the late Sorine Christine Hansen and Peter Martin, the eighth of ten children, in Cornish, Utah on April 11, 1932. Carl, or Floyd as he was best known, was the last surviving member of his immediate family and... View Obituary & Service Information

Send flowers to the Veibell family.