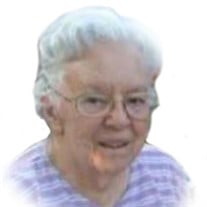 Carma Wiser Hawkes passed away in her home on June 13, 2018. She was born in Lewiston, UT, on April 23, 1929. She is the daughter of Cliff and Leona Lowe Wiser. She has two brothers, six children, 44 grandchildren, and 45 great grandchildren. She married Joseph Milton Hawkes in the Logan Temple on Nov. 26, 1952. She was raised on a farm in Trenton, then later moved to Logan and attended USU. She also worked as the secretary to USU’s president and taught at the BAC in Cedar City, as a registrar and shorthand instructor. After marrying Joseph, they traveled around the US and Europe due to Joseph’s employment with the Air Force. After retiring from the Air Force, Joseph and Carma moved back to Cache Valley where Carma worked as a secretary for Valley Engineering, raised her children, and served in many capacities for the Church of Jesus Christ of Latter-Day Saints. Carma will always be remembered for: her kind words to all she met, her homemade bread, a sense of humor coupled with loads of patience (remember she had 4 sons, and a daughter who tried to keep up with the boys, as well as many exchange students she accepted as her own), her love of music, both as a pianist/organist and a vocalist with the Chorolers, her love of volunteering with the children at North Park Elementary School, her ability to find time to cook for scout camp, sew countless projects, care for her parents and mother-in-law and adoringly love and serve her grandchildren. Carma was preceded in death by her parents, Cliff and Leona Wiser, and her brother Emery Lowe Wiser, and is survived by her husband, Joseph Milton Hawkes, her children, Kim Wiser Hawkes (Donnett), Chad Morgan Hawkes (Lynda), Kevin Cliff Hawkes (Karen), Brad Joseph Hawkes (Elaine), Christina M. Hallam (Russell), Kelli Anne Burnard, and her brother John Merle Wiser (Marlene). A viewing will be held on June 19th from 6-8 PM, in the Nelson Funeral Home 162 E. 400 N. On June 20th, a viewing will be held from 9:30-10:30 AM, followed by the funeral at 11:00, in the North Logan First Ward Chapel located at 1105 E. 2100 N. In North Logan, followed by the burial in the North Logan Memorial Park & Cemetery. Carma’s family is appreciative of the care given by hospice, Intermountain Health Care. Contributions may be made in Carma’s honor to the Cache Education Foundation. Condolences and memories may be shared with the family online at www.nelsonfuneralhome.com

Carma Wiser Hawkes passed away in her home on June 13, 2018. She was born in Lewiston, UT, on April 23, 1929. She is the daughter of Cliff and Leona Lowe Wiser. She has two brothers, six children, 44 grandchildren, and 45 great grandchildren.... View Obituary & Service Information

The family of Carma Wiser Hawkes created this Life Tributes page to make it easy to share your memories.

Send flowers to the Hawkes family.