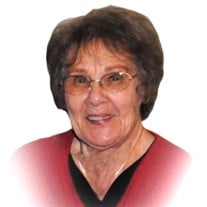 Carma Petersen Hillyard, 88, passed away in her home on April 5, 2015 surrounded by loving family members. Carma was born on September 8, 1926 in Newton, the daughter of Parley and Ella Petersen. She spent her childhood on a farm in Newton as part of a large family of five brothers and three sisters. Carma met the love of her life, Farrell Hillyard, while attending North Cache High School. They fell in love and were sealed for time and all eternity on May 25, 1944 in the Logan LDS Temple. Last May, they celebrated their 70th wedding anniversary with extended family and friends. Carma and Farrell resided the majority of their lives in Smithfield where they raised six children, which included five boys and one girl. Carma’s interests included cooking, crocheting and spending time with her husband camping and golfing. Many will remember Carma for her homemade chocolates. She also enjoyed any function that included her family. Carma was a faithful member of the Church of Jesus Christ of Latter-day Saints, having held several ward and stake callings within the Relief Society and Primary Auxiliaries. Carma was a beautiful soul with a compassionate heart always putting family and others first. Carma is survived by her husband, Farrell Hillyard of Smithfield; son, Steven Hillyard (Linda) of University Place, Washington; son, Rex Hillyard of Smithfield; son, Ross Hillyard (Renee) of Smithfield; son, Kim Hillyard (Lisa) of Kent, Washington; sisters, Marjorie Cantwell and Dorothy Otteson; 20 grandchildren, 43 great grandchildren and 1 great-great grandchild. She is preceded in death by her parents, six siblings, daughter Linda Hill, son Paul Hillyard, great grandsons Jack and Tyler Giesy. Funeral services will be held on Friday, April 10, 2015 at 12:00 p.m. at the Smithfield LDS Chapel, (625 E. 600 S). A viewing will be held at the Nelson Funeral Home, 85 South Main Street, Smithfield on Thursday evening from 6 - 8:00 p.m. and at the LDS Chapel on Friday morning from 10:30 to 11:30 a.m. Interment will be at the Smithfield City Cemetery. Condolences and expressions of sympathy may be extended to the family online at www.nelsonfuneralhome.com. In lieu of flowers, kindly consider a donation to the LDS General Missionary Fund.

Carma Petersen Hillyard, 88, passed away in her home on April 5, 2015 surrounded by loving family members. Carma was born on September 8, 1926 in Newton, the daughter of Parley and Ella Petersen. She spent her childhood on a farm in Newton as... View Obituary & Service Information

The family of Carma Peterson Hillyard created this Life Tributes page to make it easy to share your memories.

Carma Petersen Hillyard, 88, passed away in her home on April...