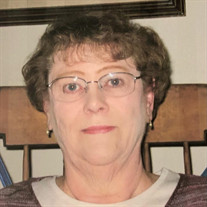 Carol Ann Stuessi was born August 31, 1939 at 4:40pm at Saint Mary's Hospital in Kansas City, Missouri to Warren and Ruth Stuessi. She was the 6th of eight children consisting of 5 boys, and 3 girls. The family moved frequently while growing up and she attended 13 different schools. When she was 16 they moved to Salt Lake City where she attended East High School and met and fell in love with Glenn Dyson. She was age 18 when they were married at the Hotel Utah on December 21, 1957 in the suite that later became the office and suite for President David O. McKay. The next month, Carol finished High school and received her Diploma of Graduation. Carol grew up Methodist. In a 2011 Christmas letter to her family she wrote, “I wasn't raise in the church but I always felt a desire to be in church since I was 5 or 6. I always enjoyed being with the kids learning about Jesus. Before we were married Glenn invited me to hear his cousin LaMar Ballard speak at a meeting where all of the missionaries bore their testimonies. Most of the missionaries were 19 but there was one who was in his 30's. He told of a Sunday he was sick and didn't go to church. His family went without him. On the way home his family was killed in an auto accident. His life was turned upside down. He decided he would have to walk away from the church or go on a mission. He decided to go on a mission. I was so touched by his testimony. Glenn and I got married and moved to California. One day I felt impressed to write Glenn's cousin and ask him to send the missionaries. Glenn wasn't active and I didn't even tell him I wrote to LaMar. One Saturday a knock came to our door. I opened it and there were 2 missionaries standing there. I just about fell over. One of the missionaries was the same missionary who impressed me almost 2 years ago. I knew Heavenly Father had sent him to me. He bore his testimony to me said he would be going home in 2 weeks but would turn me over to 2 other missionaries. Glenn took the missionary lessons with me. I was baptized on March 26 and confirmed March 27, 1960. I was baptized by Wendell Skinner and confirmed by Evan Jolly.” Soon after her baptism, she receive news that she and Glenn were expecting and that they would have a child. On January 19, 1961 she gave birth to a baby girl who they named Carrie Elizabeth. They named her Carrie because they just liked the name. Almost exactly 2 years later, they were blessed with the birth of another baby on January 12, 1963. This time a boy who they named, Stephen Glenn. Carol took care of the children while Glenn worked for a glass company and also worked another part time job. He also attend night school at Golden West college. It was during that busy time that Bishop Bawden felt prompted to invite Glenn and Carol to prepare themselves to enter the Holy Temple where they could receive the promise of the Lord that could make their family an eternal family. 1968 was a very eventfully year. It was the year that the Apollo 11 crew landed on the moon and man walked on the moon for the first time in history. But for the Dyson family something even more important happened. Carol and Glenn accepted the bishop's invitation, and on March 23, 1968 went to the Los Angeles Temple for the first time and became eternal companions. Their children went too and they received the promise of becoming part of an eternal family. Carol was very happy when on August 7, 1974 her family was complete with the birth of their last child, a son who they named him Jerry Lee. Carol loved family gatherings, she tells of a favorite Christmas tradition in her family, “As the story goes, the funny box came about during World War 2. All the adults in the family would look for things to put in the funny box. Each item was put into a small paper bag. Then they would put them into a big box. Each adult would have a least 1 thing in the box. We would look for things all year that would make that person laugh. This went on for many years. This tradition was so good because we looked all year for that special funny thing that was meant for that special person.” She was an avid reader and when she moved from Nibley to North Logan donated many books from her personal library to the Hyrum Public Library. Carol enjoyed serving in the church Relief Society and was always a willing listener, and gave compassionate service to those in need. She taught her family that Heavenly Father uses us to serve and love each other. She once said, “Love is not what you say, Love is what you do.” Prayer was very important to Carol, when her children would have a question and ask her what they should do? She would ask them if they had prayed and ask Heavenly Father what they should do? She believed that God is always just one prayer away. She felt committed to teach her family the gospel, to belief in Jesus Christ's atonement, to trust in the Lord and to Go Forth with Faith.

Carol Ann Stuessi was born August 31, 1939 at 4:40pm at Saint Mary's Hospital in Kansas City, Missouri to Warren and Ruth Stuessi. She was the 6th of eight children consisting of 5 boys, and 3 girls. The family moved frequently while growing... View Obituary & Service Information

The family of Carol Ann Stuessi Dyson created this Life Tributes page to make it easy to share your memories.

Send flowers to the Dyson family.