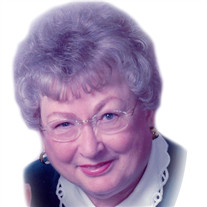 Carroll returned to her loving Father in Heaven on November 24, 2016 after a lengthy fight from several medical conditions. She will be greatly missed by her family and friends. Carroll was born on August 16, 1934 to Wallace Billstrom and Mrytle... View Obituary & Service Information

The family of Carroll Myrlin Billstrom Hansen created this Life Tributes page to make it easy to share your memories.

Carroll returned to her loving Father in Heaven on November 24,...