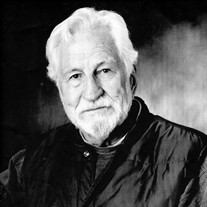 CHARLES ENGEBRETSON aka "KING BENJAMIN" Chuck Engebretson, Smithfield, Utah passed away at the VA Veterans Home, Ogden, Utah September 21, 2017. The King Benjamin painting, for which Chuck was the model, was completed by Jeremy Winborg of... View Obituary & Service Information

The family of Charles Leroy Engebretson created this Life Tributes page to make it easy to share your memories.

Send flowers to the Engebretson family.