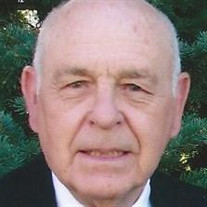 Charles Andrew Godderidge of Smithfield, died Monday, April 25, 2016, in Logan Utah just shy of his 84th birthday. Charles was born April 30, 1932, in Smithfield, Utah to William Godderidge Jr. and Alice Effie Gamet. He married Marjorie Seamons in the Logan LDS Temple on March 1, 1957. Charles lived all his life in Smithfield Utah. He graduated from North Cache High School. He was drafted into the military to serve in the Korean War, but fortunately the war ended before deployment from his base in California. He worked hard and provided well for his family and enjoyed serving others. He will always be remembered for his loving, cheerful, selfless, hardworking spirit. He is a member of the Church of Jesus Christ of Latter-day Saints and served in many capacities including as an Elder's Quorum President, a Bishop, a Counselor in two Bishoprics, twice as a member of the Stake High Council and as a Temple Officiator. Charles served as a missionary in the Knoxville Tennessee Mission in 2001 and 2002 with his wife. He retired from Utah State University where he worked in the Physical Plant. In addition to working at USU, Charles also worked several years at S&S Sports in Logan Utah. He is survived by his wife, Marjorie and their children: Cathy (Chris) Chlarson of Murrayville Illinois, Scott (Kathryn) of Farmington Utah, Brent (Chelese) of Smithfield Utah, Gary (Beth) of Boise Idaho, Tresa (Mark) Magnusson of Orlando Florida, 22 grandchildren, 18 great grandchildren and his sisters Alene (Hal) Wood and Shirley (Rodney who is deceased) Fabricius. Charles was preceded in death by his parents, 2 sisters and 3 brothers. The funeral will be held Saturday, April 30, 2016, at 12:00 noon in the Smithfield 11th Ward building, 79 East 200 South, Smithfield, Utah. Viewings will be held Friday, April 29, 2016 from 6:00 to 8:00 p.m. at the Nelson Funeral Home, 85 South Main, Smithfield, Utah and again preceding the funeral on Saturday from 10:30 to 11:30 a.m. in the 11th Ward building. Interment will be at the Smithfield City Cemetery.

The family of Charles A Godderidge created this Life Tributes page to make it easy to share your memories.

Send flowers to the Godderidge family.