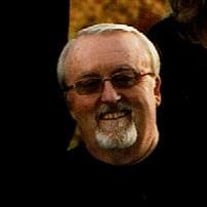 Christian Hilman Johnson III, 74, passed away November 20, 2017, in St. George, Utah. He was born in Logan, Utah to Christian Hilman and Lorraine Johnson. After attending Logan City schools and graduating from Logan High School in l961, he went on to attend Utah State University later becoming a Sheet Metal Journeyman. In 1964, he met his future wife, Elizabeth (Liz) Theurer, on a blind date, and in l966 they were married in the Logan LDS Temple. He was a High Priest in the Church of Jesus Christ of Latter- Day Saints at the time of his death. Chris and Liz lived many years in Providence, Utah, where they raised their three sons, later moving to Salt Lake City, Utah, and St. George, Utah. Chris spent a number of years as a Mess Sergeant in the Army Reserves. He had dreamed of becoming a professional chef, and preparing meals for the reservists was a close second to this dream. His love of cooking resulted in family and friends being treated to many memorable meals; the favorite being his smoked-barbequed ribs. He was a member of the Logan Golf & Country Club for 30 years spending many happy hours on the links with family and friends. He traveled to all 50 states during his lifetime, enjoying interesting cuisine each state had to offer. He enjoyed watching cooking shows, anything historical, and sports. He had a quick wit, fun sense of humor, and an infectious smile. He loved his family, but the grandkids held a special place in his heart. He looked forward to spending time with them building memories at each of their birthdays and holidays. As they grew older, he loved supporting them at baseball and soccer games, dance reviews, and piano recitals. He is survived by his wife, of 51 years, Liz, and three sons Patrick (Shantel) Providence, Utah, Paull (Connie) River Heights, Utah, and Joshua, Roy, Utah, ten grandchildren and sisters Julie Ann (Charles) Flynn, Fairview, MT., and JaNae (Blair) Mitchell, Spokane, WA. He was preceded in death by his parents and sister, Susan Obray, mother and father-in-law, Mark and Faye Theurer. The family wishes to thank the medical staffs of Southwest Internal Medicine, Dixie Regional Medical Center, The Retreat at Sun River, and Coral Desert Rehab for their kindness and care of Dad. Funeral services are under the direction of Allen-Hall Mortuary, 34 East Center Street, Logan, Utah. A viewing will be held Tuesday evening, November 28, 2017 from 6:00-8:00 p.m. and Wednesday, November 29, 2017, from 10:30-11:30 a.m. with funeral services at Noon. Interment will be in the Providence, Utah Cemetery. Condolences & memories may be shared online at www.nelsonfuneralhome.com

The family of Christian Hilman Johnson III created this Life Tributes page to make it easy to share your memories.