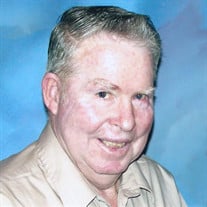 Clarence Steele Prestwich, beloved husband, father, grandfather and great grandfather passed away on January 13, 2015 in Lewiston, Utah. Clarence was born on February 23, 1933 to Clarence and Abigail Steele Prestwich in Delta, Utah. He was the tenth of twelve children. Clarence grew up in Delta and served a LDS mission in the East Central States Mission. After his return from his mission, he met his sweetheart, Karen Lynne Lees, at the College of Southern Utah in Cedar City Utah and married her on May 28, 1956 in the St. George Temple. He later graduated from Utah State University with a BA in Industrial Arts. Clarence was a high school teacher and taught shop which included wood work, metal work and auto repair. He taught in several locations for over thirty years including the Tongan Islands at the Liahona High School; Randolph, Utah; and Panaca, Nevada. He also loved sports and was a basketball coach and a wrestling coach. Clarence loved to work with his hands and with wood. You could always find him doing something in his shop. He helped many students and his own children make beautiful furniture pieces. He was a faithful member of the LDS church and served in many callings including branch president and as a high counselor. He was the father of eight children, four boys and four girls. He was also the grandfather of 28 grandchildren and five great grandchildren. He loved all his children and grandchildren very much and spent a lot of time playing and talking with them. They will always remember him for the time he spent with them. He is survived by his wife, Karen, his sons Clare (ViAnn) Prestwich, Erik (Susan) Prestwich, John (Cathy) Prestwich, Kent (Amy) Prestwich and his daughters Cara (Grandon) Brewer, Christy (Jeff) Chesley, Cindy Prestwich, Laura (Eric) Sant, 27 grandchildren and four great grandchildren . Although we will miss him, we know that he is in a better place. We loved you a lot Dad, and we will miss you. Funeral Services will be held January 19, 2015 at 11 am at the Lewiston 4th Ward Chapel, 16 S Main Street. There will be a viewing on January 18, 2015 at the Lewiston 4th Ward Chapel from 6 to 8 pm and on the 19th from 9:30-10:30 am.

The family of Clarence Steele Prestwich created this Life Tributes page to make it easy to share your memories.

Send flowers to the Prestwich family.