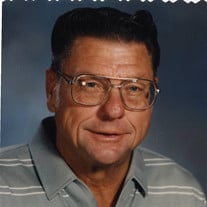 Our beloved husband, father, and grandfather passed away at his home in Logan on Thursday March 17, 2016, surrounded by his family. Known as “Boose” to his friends, “Bud” to his siblings, and “Coach” to the many students he taught in Cache County schools, the names he loved most were “Dad” and “Grandpa.” Cliff was born at the height of the Great Depression in Trenton, Utah, to Myrtle Robbins and Aaron Andreasen. He was the 12th of 13 children. He spent his childhood in Trenton. There he attended elementary school, learned to swim in the irrigation canals, hunted in nearby fields and hills, and enjoyed playing games with friends and family members. When he was twelve his family moved to Smithfield where he attended Smithfield Junior High, and then North Cache High School. His favorite subjects were math and physical education. He enjoyed athletics (especially football), socializing, and participating in school assemblies. He joined the National Guard at age 17, and after graduating from North Cache in 1950, President Truman called his unit—the 204th Field Artillery—into active duty. They received basic training at Fort Lewis, Washington, where Cliff was a proud member of their camp’s undefeated football team. Deployed to Korea in early 1951, he drove tanks and jeeps, dug holes, strung barbed wire, and helped man large field artillery guns. After his discharge from the Army in 1952, he attended Utah State University on a football scholarship and played two seasons for the Aggies. He studied business and physiology and graduated in 1956 with a Bachelor’s degree in physical education and health. He was the first in his family to graduate from college. He met Roma Wakefield Dahle in 1952. They married in the Logan Temple on October 29, 1954. They lived in apartments in Logan, worked and attended school, and welcomed their son Bryon in December 1956. They bought their first home on 9th North in Logan shortly before the birth of Betty in August 1958. Barbara was born in December 1961. Five years later the family moved a few blocks north to the Logan home they’ve occupied ever since. Coach Andreasen’s first job was teaching at Wellsville Junior High. Later he moved to South Cache Junior High. He taught a variety of subjects, including business, social studies, health, and physical education. He coached football, basketball, and track. He earned a Master’s degree in Education at USU, completing a thesis assessing the quality of physical education training for student teachers. Eventually he moved to Sky View High School where he taught physical education, physiology, and world history, and coached football, swimming, track, tennis, and golf before assuming the role of athletic director. Throughout his teaching career, he supervised over 50 student teachers, and has remained close friends with many of them. He retired in 1993 after a 37-year teaching career. In retirement he remained active playing golf, travelling to visit family and friends, and tending his beloved cats. He enjoyed reading, grocery shopping, and attending local high school sporting events and activities. The High Priest Group absorbed a lot of his time. He found great satisfaction in ministering to older ward members and those who were ill. He always felt he had been privileged to live a full and satisfying life. He felt he had been blessed by many people along the way, and strived in turn to bless the lives of others. He was a master teacher and a loving husband, father, and grandfather. We’re grateful for the many ways in which he touched our lives for good. He is survived by his wife, Roma Andreasen; children, Bryon Andreasen (Judy), Betty Midgley (Paul), Barbara Leishman, a sister, Arlene Dahle, 9 grandchildren, and 16 great-grand children. Funeral Services will be held Tuesday, March 22, 2016 at 11:00 a.m. in the Logan 19th Ward Chapel at 1255 N 600 E, Logan, Utah. Friends may call Monday evening from 6 to 8 p.m. at Nelson Funeral Home, 162 East 400 North, Logan and Tuesday at the church from 9:30 to 10:30 a.m. Interment will be held in the Logan City Cemetery with military honors. Condolences may be sent to the family online at www.nelsonfuneralhome.com.

The family of Clifford Robbins Andreasen created this Life Tributes page to make it easy to share your memories.

Our beloved husband, father, and grandfather passed away at his...

Send flowers to the Andreasen family.