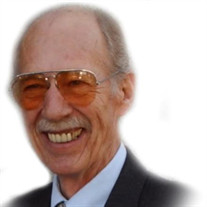 Clyde F. Baugh of Concord, Calif., was reunited with his loving wife after passing away peacefully on June 12, 2021, at 88 years old, surrounded by his loving family at home. Clyde was born in Logan, Utah, to Lawrence Knowles and Verna Frederick. He was an adventurous youth and neighborhood prankster. Growing up, he spent time on his family’s farm and visited relatives across Cache Valley and the Wasatch Front. While he was at Logan High, he played the trumpet in the school band and participated in football and baseball. During summers, he worked for the Union Pacific Railroad, following in the footsteps of his grandfather, father, sister, and many uncles who all worked for the Union Pacific Railroad. After high school, Clyde married his high school sweetheart Joan M. Carlson in 1954. After graduating from Utah State University, where he participated in ROTC, Clyde enlisted into the Army, where he was assigned to work on the Nike Missile Defense system in El Paso, Texas. After serving in the Army, he moved his family to California, where he worked with Bank of America, becoming the youngest bank manager in the bank’s history. Clyde served as President of the Concord Jaycees and then as Vice President for the State Jaycees. He was very involved in many civic activities. He also had a love of soccer and refereed for the U.S. Soccer Federation and was a National Intercollegiate Soccer Officials Association member. During this time, Clyde and Joan had two children Shellie and Ric. Clyde worked various jobs before becoming the Controller for Oakland Container Terminal, the fifth largest port in the U.S. He worked there until Joan had health issues that required him to retire to help with her care full time. They spent time with family during these years, especially Thanksgiving at Six Flags, where he was the first in line for all the roller coasters. They also made sure to attend many of Logan High School’s class of 1954 reunions in Cache Valley. Clyde devoted his life to ensure that Joan was cared for and loved until the end, when she passed in 2013. Clyde was the perfect example of pure Christ-like love and service towards others and will be remembered as a loving husband, grandfather, great grandfather, uncle, great uncle, and friend, including those members of the “Hole in the Donut Gang” at King’s Donuts, Concord, Ca. Clyde loved his family and was always so very proud of them. Clyde was preceded in death by his beloved wife, Joan Carlson Baugh, his parents, sister Helen Evans, and brother Lawrence Baugh Jr. He leaves behind his devoted children and spouses, Shellie (Ron) Jensen and Ric (Janet) Baugh. His grandchildren will never forget him, Jared (Lacie) Jensen, Denise Baugh, Mitch (Katie) Baugh, Kristen (Bret) Rowley, Trent Baugh, and great-grandchildren Saylor, Willow, and Monroe Jensen, Oliver and Clyde Baugh, and Charlotte Rowley. His nieces and nephews, Geri Freer, Judy Anderson, Jennifer Peterson, Rich Carlson, David Kest, Diana Lando, Allyson Flowers, and Bronwyn Keele. A Memorial service will be held on Saturday, June 26th, 2021, at 10:00 AM at Nelson Funeral Home, 162 East 400 North, Logan, Utah. Interment will follow at the Logan Cemetery. In lieu of flowers, donations can be made to your favorite charity. Condolences & memories may be shared online at www.nelsonfuneralhome.com

Clyde F. Baugh of Concord, Calif., was reunited with his loving wife after passing away peacefully on June 12, 2021, at 88 years old, surrounded by his loving family at home. Clyde was born in Logan, Utah, to Lawrence Knowles and Verna Frederick.... View Obituary & Service Information

The family of Clyde Frederick Baugh created this Life Tributes page to make it easy to share your memories.

Clyde F. Baugh of Concord, Calif., was reunited with his loving...

Send flowers to the Baugh family.