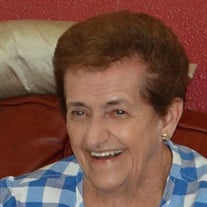 Colleen Purser Peterson passed away Saturday, February 20th, 2021 at home in Riverdale. She was 91 years old. She was born November 21st, 1929 to Elva Seeholzer Purser and Delbert Purser. She spent her childhood in Logan where she enjoyed many hours playing in the orchards with her best friend Donna. On November 19,th 1945 she married her sweetheart Jesse Haws Peterson of Petersboro. Together they had five daughters. After Jesse’s passing in 2004, she remained in their home for 5 years until changes in her mobility made the big yard and house too much, so in 2009 she moved to her daughter’s home in Riverdale. She loved traveling, especially to the Northwest where she and Jess had been many times and later, she made several trips to see her daughter and grandchildren in Tampa. There are many wonderful stories about our Mom we would love to share, but she wanted this to be brief and to the point so we will honor her wishes. She is preceded in death by her husband Jesse, her Mother and Father and brother Jerry. She is survived by her daughters: Coy (Lowell) Lofgreen, Bountiful, Kathy Olsen, Tampa, Susan Peterson, Salt Lake City, Karen (Mike) Wright, Wellsville and Judy (Randy) Williams of Riverdale. 5 Grandchildren, 11 great grandchildren and her best friend of 87 years, Donna Groll Nelson, Buckeye, AZ The family would like to thank Dr. Kelly Amann, Jana, Jeanie, and Nate, of Ogden Clinic The late Dr. James Jones, Utah Imaging Korie from Atlas hospice, for your gentle loving care. And a special thank you to her physical therapist and dear friend, Gus Bolos. There are no words to express our appreciation for all the years you cared for her. You are an incredible human and the knowledge and care you gave, not only increased the years she had on earth but made those final years much less painful. Thank you just is not enough. Due to Covid-19, there will not be a public service. Per Colleens wishes, there will be a small private service for her immediate family. In lieu of flowers, donations may be made to Shriners Hospital or St Judes. She will be laid to rest next to her husband Jesse in the Logan City Cemetery.

Colleen Purser Peterson passed away Saturday, February 20th, 2021 at home in Riverdale. She was 91 years old. She was born November 21st, 1929 to Elva Seeholzer Purser and Delbert Purser. She spent her childhood in Logan where she enjoyed many... View Obituary & Service Information

The family of Colleen Purser Peterson created this Life Tributes page to make it easy to share your memories.