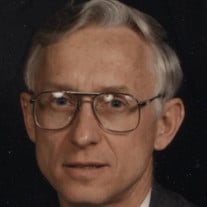 Conrad Glayd Mather, age 77, died December 2, 2016 in Pleasant Grove, Utah. Glayd was born June 10, 1939 in Logan, Utah, the oldest son of Conrad Harry Mather and Erma Johnson of Smithfield, Utah. He grew up in Smithfield, worked on the family farm, and graduated from North Cache High School. He was an active member of The Church of Jesus Christ of Latter-day Saints, served in many church callings, and as a full-time missionary in the Eastern States Mission. He married Sharon Christiansen in the Logan LDS Temple on February 27, 1964. Glayd enjoyed playing American Legion and Utah State University baseball as a pitcher, and graduated from USU with Bachelor’s and Master’s degrees in Electrical Engineering. He worked at Lawrence Livermore National Laboratory in California from 1965 to 1967, and taught at Northern Arizona University from 1967 to 1973 and at Brigham Young University in the Electronics Engineering Technology department from 1974 through 1994. He had a passion for teaching and mentoring students. He was an avid BYU sports fan and rarely missed a game. In his later years of life, he dedicated his time to researching family history. He also enjoyed road trips to historical sites and national parks. He is survived by his wife Sharon Mather; his five children Eric Mather (Rose), Kurt Mather (Jeanne), Jon Mather (Kim), Julie Huish (Jared), Bret Mather (Alicia), 23 grandchildren, brother Gerry Mather (Rosa) and sister Guila Bitner (Jeff). He is preceded in death by his father Conrad (2009), mother Erma (2005), and brother Garth (1986). The family wishes to thank the Taylor Arizona Harvest Valley Ward members, and the staff of Show Low Arizona Summit Regional Medical Center, Pleasant Grove Utah Alpine Valley Care Center, and Adagio Hospice. A viewing will be held from 10:30am - 11:30am, Tuesday, December 6, 2016 at the Nelson Funeral Home, 85 South Main Street, Smithfield. A graveside service will be 12:00pm, Tuesday December 6, 2016 at the Smithfield City Cemetery at 300 East Center Street, Smithfield. In lieu of flowers, the family requests a donation to the USU student scholarship fund (http://www.usu.edu/giving) or LDS Philanthropies (https://www.ldsphilanthropies.org/current-giving-opportunities.html).

The family of Conrad Glayd Mather created this Life Tributes page to make it easy to share your memories.