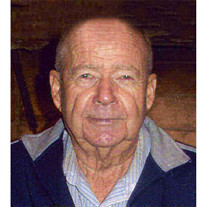 Honeyville, UT – Courtly Fenton Holman, 85, passed away Sunday, August 16, 2009 at home. He was born November 25, 1923 to Robert Ross and Mary Rebecca Brown Holman in Bear River City, UT. He was reared and educated in the Bear River Valley. Courtly served in the US Army during WWII stationed in Europe. He married Helen Hunsaker November 25, 1947 in Ogden, UT. Their marriage was solemnized 1952 in the Los Angeles LDS Temple. After working as a commercial carpenter for 30 years in California, Courtly and Helen moved to Honeyville. He enjoyed hunting and the outdoors. He is an Elder in the Honeyville 2nd Ward. While in California, he served in the Young Men's Presidency, Elder's Quorum Secretary and in the scouting program. Surviving are his wife, Helen; one son, Darell P. Holman, three grandchildren: Courtley, Stacie and Shane; eight great-grandchildren: Jenny, Jodi, Courtnie, Megan, Kirsten, Kim, Tanner and Tyler; two sisters: Colleen Dean Hunsaker and Wanda Simmons. He is preceded in death by his parents, four brothers, and five sisters. Funeral services will be held Saturday, August 22, 2009 11:00 a.m. at Rogers and Taylor Funeral Chapel, 111 North 100 East, Tremonton. Family and friends may call Saturday from 9:15- 10:40 a.m. at the funeral home. Interment will be at Honeyville Cemetery where military honors will be accorded.

The family of Courtly Fenton Holman created this Life Tributes page to make it easy to share your memories.

Send flowers to the Holman family.