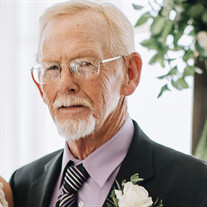 Daniel William Wheeler, 76, of Richmond, Utah, peacefully passed away surrounded by loved ones and without pain on July 1st, 2019. Dan was born in Lewiston, Utah in 1943. He was the fourth of seven children born to Delbert and Hilda Wheeler. He graduated from North Cache High School. He spent his school years playing baseball, basketball, softball and then later golf became his true passion. He served an LDS mission in the Dallas-Fort Worth, Texas area. He married (and later divorced) Janet (Mauchley) Harpe. Together they had two beautiful daughters, Carrie and Danielle. Dan proudly raised his girls as a single father, providing a loving home filled with laughter and dancing. In 17 years, he never missed a morning phone call to his daughters assuring they were up and on their way to school. He was a dependable employee of Thiokol Corporation for 25 years. One of his career highlights was being nominated as employee of the year, where he and his daughters were given the opportunity to go to Florida to watch the space shuttle launch. While working at Thiokol, Dan gained many life long friends. Throughout his life Dan enjoyed fishing, wood working, caring for his pristine lawn, golfing, Maverick runs and helping anyone in need. Dan’s motto was “I am available and/or willing to help”. A special thank you to neighbors, friends and his little buddy, Cayman, for all of love and protection generously given throughout the years. Thank you also to Sunridge Assisted Living and AFI Hospice for their outstanding compassion and care. Dan is survived by his daughters Carrie (Sean) and Danielle; his grandchildren Parker, Bailey (John), Jackson and Hannah; his sisters LaRae and Jacqueline and many loving nieces, nephews and extended family. He was proceeded in death by parents Delbert and Hilda Wheeler, his sisters Karla, Norma, Kayleen and brother Kim. A viewing will be held on Friday, July 5th from 6:00 until 8:00 PM at Nelson Funeral Home located on 85 Main Street in Smithfield, Utah. A small graveside service will be held at Lewiston Cemetery on Saturday, July 6th at 11:00 AM.

Daniel William Wheeler, 76, of Richmond, Utah, peacefully passed away surrounded by loved ones and without pain on July 1st, 2019. Dan was born in Lewiston, Utah in 1943. He was the fourth of seven children born to Delbert and Hilda Wheeler.... View Obituary & Service Information

The family of Daniel William Wheeler created this Life Tributes page to make it easy to share your memories.

Send flowers to the Wheeler family.