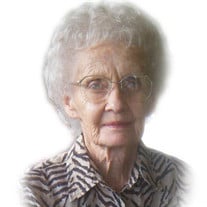 Faye Chambers Shupe passed away on Friday, February 27, 2015. She was born in Smithfield, Utah on February 17, 1931 to George and Tacy Toolson Chambers. She received her education in the Cache County school system graduating from North Cache High School in 1949. She continued her education at Utah State Agriculture College (USU) receiving her Bachelor of Science degree in Child Development and Elementary Education in 1953. Even as important to her, she graduated from the LDS Institute that same year. Faye conveyed her love of learning to the many children she taught throughout the years. Even after retirement she continued her life-long passion of education by teaching neighborhood children in her home. Faye married James LeGrande Shupe on September 3, 1957 in the Salt Lake Temple. They spent their first year of marriage in Washington, DC before returning to Cache Valley where they spent the rest of their lives. Her priorities were being a wife, mother, grandmother, and homemaker. She always supported her sons in their school work and spent countless hours helping them in their extracurricular activities. During the time her sons were getting their education she was always active in the PTA, and served as a room mother and library helper. She served the community as secretary of the Hyde Park Little League and on the several Hyde Park City Boards. As an active member in the Church of Jesus Christ of Latter-day Saints and she spent many years of faithful service in teaching and leadership positions including Primary and Relief Society Presidents. She and LeGrande were blessed to serve two missions first to the Nauvoo Visitors Center (1988-1989) and later to the San Diego Visitors Center (1993-1994). After returning from San Diego they accepted a call to be officiators in the Logan Temple where she served for over 11 years. Some of her greatest joys were family history research and temple service. She realized the importance of finding her ancestors and rejoiced in the temple ordinances she and her family were able to perform for their ancestors. Faye was a hard worker and passionate gardener. She was rewarded by the bounty of her efforts each year in the beauty of her flower and vegetables gardens. She had a deep love for nature and sharing the results of her harvest and knowledge with others. Over the years she has had a role in caring for many pets, farm animals and wild life. Faye is survived by her two sons James G (Margaret) and Dennis C (Merrilee) Shupe; three grandchildren Laura, Elizabeth and George Shupe; two sisters, Tacy (Oral L) Ballam of St. George and Ruth (Deane) Harrison of Hyrum, and many nieces and nephews. She was preceded in death by her parents, husband, grandson Grant Joseph Shupe, and siblings Ferris (Ruth) and Lennis (Drue) Chambers, Alice (Garnell) Poppleton, Mary (Scott) Bair, and Aileen (Ray) Minkler. Funeral services will be held Saturday, March 7, 2015 at 11:00 am under the direction of Nelson Funeral Home. Family and friends may call from 6:30 – 7:30 p.m. Friday, March 6th or prior to services Saturday, March 7th at the Hyde Park Stake Center, 535 E 200 S, Hyde Park, Utah from 9:30 – 10:30 a.m. Interment will be in the Smithfield Cemetery. In lieu of flowers the family suggests contributions to the Perpetual Education Fund, 50 East North Temple, Salt Lake City UT 84150-1501.

Faye Chambers Shupe passed away on Friday, February 27, 2015. She was born in Smithfield, Utah on February 17, 1931 to George and Tacy Toolson Chambers. She received her education in the Cache County school system graduating from North Cache... View Obituary & Service Information

The family of Daphne Faye Chambers Shupe created this Life Tributes page to make it easy to share your memories.