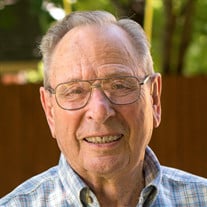 David LaWayne Hanks of North Logan passed away September 2, 2017. David was born in Tetonia, Idaho, October 5, 1925, the son of David Capener Hanks and Emma Hulet Cook. He graduated from Teton High School in Driggs, Idaho. He was inducted into the U.S. Navy in 1945, where he was trained in the operation and maintenance of RADAR equipment. Following discharge from the Navy, he served as an LDS missionary in the Eastern States Mission. He married Elen Wallace in the Idaho Falls LDS Temple on June 15, 1949. Following a few years working on the family farm in Tetonia, David attended Idaho State University. He received his baccalaureate and masters degrees from Brigham Young University and his doctorate from the University of Michigan. He taught briefly at Brigham Young University, after which he accepted a position at Northeast Missouri State University in Kirksville, Missouri. He taught there for 21 years. Following his retirement in 1990, he and Elen moved to Clarkston, Utah. In 1991, they accepted a call to serve for eighteen months in the Missouri, St. Louis Mission and again in 1997, they accepted a missionary call to help open the St. Louis LDS Temple. In 2001, David and Elen moved to Rio Rancho, New Mexico where they lived until 2009. While in New Mexico, they served for thirty-two months with the Tohajiilee Branch of the LDS Church located on the Navajo reservation. In 2009, they moved back to Utah, settling in North Logan. David has served in numerous teaching, missionary, and leadership positions in the Church of Jesus Christ of Latter-day Saints. David is survived by his wife, Elen Wallace Hanks; seven children, Lecia (Michael) Johansen of Ninety-Six, SC; David (Joyce) of Council Bluffs, IA; Steven (Jean) of North Logan, UT; Aaron (Jenny) of Issaquah, WA; John (Debi) of Boise, ID; Byron (Patti) of Albuquerque, NM; Richard (Carrie) of Charlotte, NC; Sam and Tia Silvey of Springville, UT; 46 grandchildren, and 97 great-grandchildren. He is also survived by his brother Philip Hanks, sisters Betty Jane Misseldine and Lousie Gohnert. He was preceded in death by his parents; eight brothers; Harvard, George Augustus, Earl, Ted, Adrian Cook, Wright, Clair, Lincoln; and two sisters; Mae Hanks, and Davida Hanks Green. A viewing will be held Thursday, September 7, from 6:00–7:30pm at the Nelson Funeral Home: 162 E 400 N, Logan, UT. Funeral Services will be held Friday, September 8, 2017 at 11:00am at the LDS chapel at 1550 E 1900 N, North Logan, UT. A viewing will be held from 9:30–10:30am at the church prior to the funeral. In lieu of flowers, please send donations to Access Hospice of Logan: 74 W 100 N, Logan, UT, 84321. The family wants to thank the amazing staff at Legacy House for their loving care of David. Also, we thank all those at Access Hospice of Logan for the care and services provided in the last few months.

David LaWayne Hanks of North Logan passed away September 2, 2017. David was born in Tetonia, Idaho, October 5, 1925, the son of David Capener Hanks and Emma Hulet Cook. He graduated from Teton High School in Driggs, Idaho. He was inducted into... View Obituary & Service Information

The family of David LaWayne Hanks created this Life Tributes page to make it easy to share your memories.

Send flowers to the Hanks family.