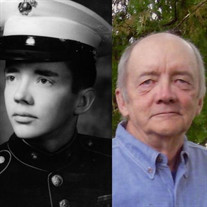 David William Mathews was the second child born to William J. Mathews (Bill) and Jean Sant. He was born July 6, 1952 and was Birthday Buddies with his fraternal Grandmother, Retta Chugg Mathews, whom he called his "rock in a storm". He and sister Carol lived with their father at Retta's home for several years after his mother Jean died in 1954. Bill married Joy Bench in 1960. Dave acquired sister Diana Allen, brothers Steven and Tracy Allen. Brothers Jeff and Tyler came along later of that union. Dave joined the Marines at age 17 and served his country until he received an honorable discharge in July 1971. He worked his Uncle Tom's farm in Washington State for a few years, kicked around Soda Springs for a while, then finally returned to Cache Valley. His trade was welding. He enrolled at USU, studied hard, enjoyed using his brain and graduated with honors at the top of his class with a degree in Welding Technology, in May 1996. He worked at Schreiber Foods for several years keeping lines repaired and inventing some new more efficient machines. He farmed a 10 acre piece of ground in Providence and considered himself to be a gentleman farmer, even though he sure didn't like to irrigate that #%@+ piece of high ground that made the water go in the wrong direction. Dave managed to get a real nice garden to grow in that rock pile that was his garden in back of his Providence house, lovingly (or not), known as the Chicken Coop by the rest of the family. As nice as his garden was, he never grew a single tomato. Yuck! Poisonous! He did cut down that nice blue plum tree that was back there. There were many nieces and nephews. He had time tor them and taught more than one how to weld and make repairs. He had time for neighbors and friends and often sat and talked for hours. He plowed out many neighbor's driveways and helped where he could. He was a minimalist, loved to walk and could often be seen walking around Providence and up on the bench. He died of Creutszfeldt-Jakob Disease on February 14, 2022, you'll have to Google it, we all did, it's rare, always fatal and blessedly fast. Graveside Services will be held February 26th, 11 am at the Providence City cemetery.

David William Mathews was the second child born to William J. Mathews (Bill) and Jean Sant. He was born July 6, 1952 and was Birthday Buddies with his fraternal Grandmother, Retta Chugg Mathews, whom he called his "rock in a storm". He and... View Obituary & Service Information

The family of David William Mathews created this Life Tributes page to make it easy to share your memories.

Send flowers to the Mathews family.