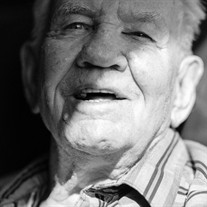 David Clair Weeks of Smithfield, Utah, passed away of natural causes on Saturday, April 15, 2017, in Providence, Utah. David was born on September 30, 1920, to Asa and Lillie Weeks. David married Veda Bunderson in the Logan LDS temple on June 11,1947. David spent his early years learning how to work hard at home and on the family farm. He attended North Cache High School and Utah State University where he studied engineering and dairy science. David served an LDS mission to Hawaii. This experience gave him a life- long love of Hawaii. After returning from his mission, he served in the US Army during WWII for 2 ½ years. He reached the rank of Sgt Major. He wrote a book about his experiences in the military. After the war was over, David, his father, and brother, started the Weeks Dairy. He also worked for PET Milk Company. When the Postmaster job opened in Smithfield, David was chosen. He enjoyed meeting and visiting the citizens of Smithfield. He was active in the Postmaster Association and served as a State President. Once he was called to Washington, DC to testify before the US Senate Post Office Committee about pending legislation. David was honored to be named Citizen of the Year in Smithfield. David has been very active in the LDS church serving as a Missionary and District President in Hawaii, Scoutmaster, Explorer leader, Elder’s Quorum President, President of the 70’s, Stake Missionary and Stake Mission President, and 50 years as a teacher. David recently lived in Providence at Cache Valley Assisted Living. While there, he enjoyed many activities and made wonderful friends. The family would like to thank the staff for their loving care. David was proceeded in death by his wife Veda, son David Alan, grandson Ryan David, his parents, and four siblings. He is survived by his daughters Mari Lani Jensen, and Coral Lombard (Edward), his grandchildren: Kayvon Ghaffari, Arman Ghaffari (Suzy), Kamran Ghaffari, Mackenzie Lombard, adopted grandson Tyler Anderson, and 3 great grandsons. The viewing will be held this Friday, April 21, at Nelson Funeral Home in Smithfield (85 S Main St.) from 6-8 P.M. The funeral will be held on Saturday at the Smithfield 1st ward building at 79 East 200 South. Saturday viewing will be from 12 to 1. The funeral service will start at 1:30 P.M. Burial will be in the Smithfield Cemetery.

The family of David Clair Weeks created this Life Tributes page to make it easy to share your memories.

David Clair Weeks of Smithfield, Utah, passed away of natural...

Send flowers to the Weeks family.