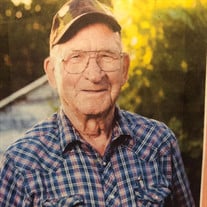 Dayton Leon Denton passed away peacefully at the Logan Regional Hospital surrounded by his family on December 18, 2020. He was born on October 10, 1926, in Scranton, Arkansas. He met his true love, Marion Johnson, on a blind date during World War II in Maryland. They were married November 29, 1946, later solemnized in the Logan LDS Temple, October 16, 1969. Leon was in the Army and served his country during world War II. Leon, or to his family, Grandpa Denton, was a happy, friendly person who loved his family very much and would spend any spare time he had doing things with them or for them. Grandpa Denton worked hard to support his family and had various businesses during his lifetime. One of his favorite hobbies was gardening. He always had a beautiful garden and would give tips to family and friends on how to improve theirs. Another hobby was working on cars. He was very knowledgable about cars and helped others fix theirs and got them going again. Grandpa Denton was an active member of the Church of Jesus Christ of Latter-Day Saints and served in many positions, including 11 years of service at the Logan Temple. He was a gregarious man and knew many people and had many friends throughout his life, and will be missed by all who knew him. Grandpa Denton was preceded in death by his parents, Lawrence and Isa Denton; his wife Marion; a brother Bob; a sister Linda Poole; a son, Steven (Cathy); two granddaughters, Carolyn (Rick Elder) and Kaylee Volkman; a grandson-in-law, TJ Fluckiger (Jenna Frandsen); and son-in-law, Ken (Beverly) Volkman. He is survived by five children; Audrie (Gordon) Goldsberry; Donna (Chris) Conner; Helen (Jeff) Jeppsen; Gary (Roxie) Denton; and Beverly (Ken) Volkman. Also, 26 grandchildren, 70 great-grandchildren, and 7 great-great-grandchildren. Due to COVID-19, a private family funeral will be held on Monday, Dec. 21 at 1 pm. You may view the funeral live with the following link: https://youtu.be/K9bCg1QAeIE Interment will follow at the Smithfield City Cemetery. Condolences & memories may be expressed online at www.nelsonfuneralhome.com

Dayton Leon Denton passed away peacefully at the Logan Regional Hospital surrounded by his family on December 18, 2020. He was born on October 10, 1926, in Scranton, Arkansas. He met his true love, Marion Johnson, on a blind date during World... View Obituary & Service Information

The family of Dayton Leon Denton created this Life Tributes page to make it easy to share your memories.

Dayton Leon Denton passed away peacefully at the Logan Regional...

Send flowers to the Denton family.