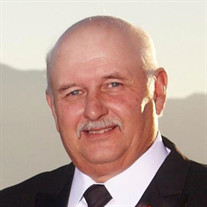 Dean Hillard Archibald, 68, of Clarkston, Utah, died Friday, December 11, 2020 in Brigham City hospital after battling with an extended illness for many years. He was born January 11, 1952 in Logan, Utah to Hillard D. Archibald and Hattie Mae Thompson Archibald. Dean lived all his life in Clarkston, attended Clarkston Elementary School, Lewiston Jr. High, and Sky View High School. He served in the Army Reserves from 1970 -1976. Dean married Margie Jardine on June 29, 1973 in the Logan LDS Temple. They had two children: Stefanie and Matthew. Dean worked for Pacific Corp at Cutler Dam for 40 years where he had many friends. He farmed with his dad until his father passed and then kept the farm going right up until the time of his own death. Dean was an incredibly hard worker. He shared his love of farming with his son Matt. Dean also spent many years working for Clarkston Town and was awarded the Outstanding Employee of the Year in 2020. Dean was a member of the Church of Jesus Christ of Latter-Day Saints where he served in various capacities throughout the years. He led by example and faith and taught his children to love the Lord. Dean loved to hunt, fish, farm and be with his family. He was so funny, kind, a friend to many, and a great tease. Dean is survived by his wife Margie (Jardine) Archibald of Clarkston, his daughter Stefanie (Newlin) Kent of Fielding, his son Matt (Lisa) Archibald of Clarkston, his sisters Gwenda (Del) Bridenstine of Brigham City, Cleone (Richard) Allsop of Trenton, and Martha Ann Arnold of Layton, his brother Cecil (Lorna) of Benson, his sister-in-law Margaret Archibald of Smithfield, his seven grandchildren (Shayler, Savanna, Sydnie, Shandon, Tinley, Tayson, and Hattie), and his three step-grandchildren (Trevyn, Lance, and Sydnee). He was preceded in death by both of his parents, two brothers – Theron and Lorin, his brother-in-law Kerry Arnold, and his nephew Doug Archibald. A viewing will be held on Tuesday, December 15, 2020 from 6 to 8 pm and again prior to the funeral on December 16, 2020 from 10:30 to 11:30. Funeral services will be held Wednesday, December 16, 2020 at noon with Bishop John Ravsten conducting. All services will be held at Nelson Funeral Home, 162 E 400 N, Logan, Utah. Burial will be in the Clarkston Cemetery. Our hearts are broken to have Dean gone from this earth but we are so grateful he is freed from the weaknesses of his earthly body and reunited with all his family that have gone before. Dean, we love you so much and will miss you immensely! To listen to an audio recording of the funeral service please use the following link: http://videos.lifetributes.com/1108237

Dean Hillard Archibald, 68, of Clarkston, Utah, died Friday, December 11, 2020 in Brigham City hospital after battling with an extended illness for many years. He was born January 11, 1952 in Logan, Utah to Hillard D. Archibald and Hattie Mae... View Obituary & Service Information

The family of Dean Hillard Archibald created this Life Tributes page to make it easy to share your memories.

Send flowers to the Archibald family.