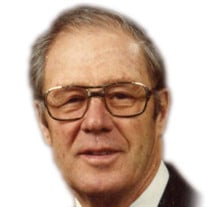 Logan- Dean J. Rogers, 94, of Logan, passed away on Saturday, January 31, 2015 at his home. Dean was born April 12, 1920, in Brigham City Utah. He was the second son of Lewis Clifford and Blanche Jorgensen Rogers. He lived in California and Ogden, Utah, before moving to Logan. Dean attended Logan City Schools and graduated from Utah State Agricultural College in 1942, majoring in Range Management and Military Science. He met the love of his life, Mary Berntson, when he moved to Logan. Dean and Mary began their lifelong journey together when Mary first introduced herself at the age of 8 to Dean and he was 10. She had invited him over to her home to see the family’s pet duck. They were married in the Logan Temple on January 6, 1943. Dean and Mary just celebrated their 72nd wedding anniversary. Dean’s life has been one of service to his family, church, country and community. He served four years in the armed forces during World War II, achieving the rank of Major. Dean later joined the 204th Artillery Battalion, stationed in Logan. They were called to active duty for two years where he spent time in Korea during the Korean Conflict. He was active in his community his whole life. He served on the Logan City Wage and Salary Board, secretary of the Aggie Quarterback Club, now known as The Big Blue Club. He has been a past president of the Cache County Chapter USU Alumni Association. He was director and vice president of the Cache County Chamber of Commerce, and also served for eight years as chairman of their winter sports committee, and was responsible for the annual ski school which helped thousands of young people begin the love of skiing. He was president of the Logan Wildlife Federation. He was president of Logan Savings and Loan Board of Directors. Dean was awarded the Distinguished Service Award for the outstanding young man of Logan City in 1954. He had a great love for the Boy Scouts of America. He was over a 50 year Scouting Veteran, having served as a Scoutmaster, Explorer Advisor, District Camping and Training Chairman and merit badge counselor. He received the Outstanding Scout Leader Award, the Scouters Key, and the Old Ephraim District Award of Merit. He was a member of the Executive Board of the Cache Valley Council. He was also a camp inspector and traveled all over the Intermountain West inspecting the different scout camps. Dean received the District Merit Award and also the Silver Beaver Award. He was recognized as one of the top Scout Masters in the valley. He was a member of the Logan Rotary Club and Century Dinner and Dance Club for over 40 years. Dean has always been active in the LDS Church, serving as elders quorum president, bishop’s counselor, bishop, high councilor and stake clerk. He also served over 10 years as a temple officiator in the Logan Temple. Dean and Mary served a mission for their church in New York City. He worked with his father at the Superior Cleaners for many years, becoming owner when his father retired. He sold the cleaners and went to work for the Cache National Forest, then later transferred to the Intermountain Forest and Range Experiment Station, U.S. Forest Service, as the Business Management Specialist. He retired from the U.S. Forrest Service in 1983. He quickly became bored with retirement, so he went back to work for Utah State University. Dean was an avid outdoor enthusiast. He has fished and hunted all over the Logan and Blacksmith Fork Canyons. He loved to play golf and ski. He enjoyed his annual trips to Yellowstone National Park with family and friends. Later on in life he developed the art of oil painting. Dean is survived by his wife, Mary, daughter, Marianne, 8 grandchildren and 12 great grandchildren. He was proceeded in death by his parents Cliff and Blanche, siblings, Max and Mona Lee, sons Larry and Dale, two foster children, LaVae and LeRoy and a great grandson, Keshun. We would like to thank the wonderful staff from Access Hospice for their devoted care of Dean. We wish to extend a special thanks and appreciation to Dianne Crockett, for her extraordinary nursing service and care. Funeral services will be held on Friday, February 6, 2015 at 12:00 at the Logan 16th Ward, 125 West 600 North in Logan. A viewing for family and friends will be held on Thursday, February 5, from 6:00- 8:00 p.m. at the Nelson Funeral Home at 162 East 400 North in Logan, and on Friday from 10:30-11:30 a.m. at the church prior to services. Interment will be at the Logan Cemetery. Condolences may be sent to the family online at www.nelsonfuneralhome.com.

Logan- Dean J. Rogers, 94, of Logan, passed away on Saturday, January 31, 2015 at his home. Dean was born April 12, 1920, in Brigham City Utah. He was the second son of Lewis Clifford and Blanche Jorgensen Rogers. He lived in California and... View Obituary & Service Information

The family of Dean J Rogers created this Life Tributes page to make it easy to share your memories.

Send flowers to the Rogers family.