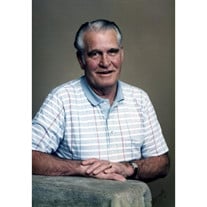 DELBERT W. ALVEY Delbert Deb W. Alvey passed away Saturday, October 23, 2010 at his home in Lewiston, Utah. He died quickly and peacefully with family members at his side. Delbert was born on April 22, 1919 in St. Leon Idaho Falls, Idaho to Bertha Roth Alvey and William Levert Alvey. He was the fifth child in a family of eleven children. Deb received his education in Logan and Smithfield schools. He married Mary Jane Price on November 29, 1938 in Brigham City, Utah. Deb and his wife purchased their farm in Lewiston in 1943. He also was a longtime and loyal employee of Cache Valley Dairy where he served as Packaging Manager, Production Manager, and Maintenance Manager and over Quality Control. He retired from the Dairy after 37 years of service. Deb was an example in showing his children the value of hard work and dedication. Upon his retirement, Deb trained and raced thoroughbred horses which he loved and enjoyed. He also grew an enviable vegetable garden each year that was treasured by his family members. Deb enjoyed fishing, snowmobiling, waterskiing and was an avid hunter. He also enjoyed his trips to Wendover and could play a mean game of pinochle up to the very end. He was a fan of the Utah Jazz, the BYU and Utah State football and basketball teams and especially enjoyed watching Kansas City Royals baseball. But above all, Deb enjoyed time spent with his children, grandchildren and great-grandchildren. His children describe him as strong, compassionate, hard working, proud and good lookingCand are sure their mother saw in him all these qualities 72 years ago! He is survived by his wife, Mary, and his six children: Gary Judine Alvey of Palmetto, Florida; Mary Lee Ted Hill of Rexburg, Idaho; Lynn Bob Moore of Medina, Washington; Deborah Read of Logan, Utah; Bobbie David Poppleton of West Linn, Oregon and Billie Scott Palmer of Hyrum, Utah. In addition he is survived by 20 grandchildren and great-grandchildren soon numbering 32. Delbert is also survived by his sister Elaine Rodgers of Tacoma, Washington; Gail Alvey of Richmond; June Hansen of Salt Lake; and Arlene Butterfield of Murray, Utah. He is preceded in death by his parents; sisters: Beatrice, Bonnie, Eve, Edna, Geraldine and a brother Fred. The family would like to thank Dr. Russell Hirst for years of compassionate care and the members of the Lewiston Second Ward for their kind and helpful service. A viewing will be held on Wednesday evening, October 27 from 6 to 8pm and also from 10:30 am until 11:30 am on Thursday, October 28 at the Lewiston Second Ward chapel located at 10 South 1600 West, Lewiston, Utah. Funeral services will held at the same location at noon. Burial will be in the Lewiston Cemetery. Condolences and memories may be shared with the family at www.nelsonfuneralhome.com

DELBERT W. ALVEY Delbert Deb W. Alvey passed away Saturday, October 23, 2010 at his home in Lewiston, Utah. He died quickly and peacefully with family members at his side. Delbert was born on April 22, 1919 in St. Leon Idaho Falls, Idaho to... View Obituary & Service Information

The family of Delbert Deb W. Alvey created this Life Tributes page to make it easy to share your memories.

Send flowers to the Alvey family.